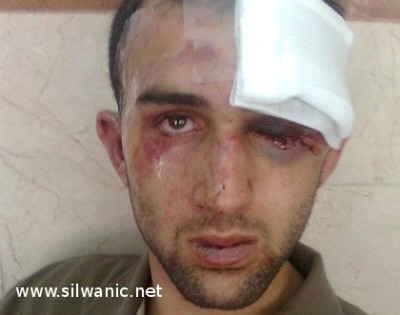 A resident from Silwan, aged 21, was severely assaulted, beaten, and abused by a group of extremist Jews this Saturday, November 6, 2010, as he was walking late at night near Hillel Street in West Jerusalem. He recalls walking along when a girl stopped him and asked him for a cigarette, and during a brief chat discovered that he was Palestinian. Shortly after they parted ways, he was attacked by a number of Jewish extremists. He tried to scream that he was a Jew of Moroccan descent, until finally his attackers stopped assaulting him long enough to look for his identity card. Upon confirming he was Palestinian, however, the men tortured him, beating him in the face and head with stones and spraying him with gas, as well as stealing his mobile phone. He managed to escape his attackers and was able to reach a main street, where he lost consciousness. From there he was transferred to a hospital, where he was treated for severe injuries to the eyelid, forehead and ear, as well as significant bruising and injuries to the head resulting from the brutal attacks with stones.

The following day, his father filed a complaint with the police and called on the Israeli authorities to put up surveillance cameras on the streets of Hillel, Musrara, and the bell garden, in West Jerusalem where assaults against Palestinians are becoming increasingly common.

Ahmed Sbaih, 41, suffered a similar attack on the night of October 31, 2010, after an Israeli stopped him to ask for a cigarette near the Ma’man Allah cemetery in West Jerusalem. Shortly afterward, Ahmed came upon a large group of Jewish extremists who demanded cigarettes from him and asked his name. When they determined he was Palestinian, the men began beating him with large stones that they had concealed under their clothes. Sbaih suffered three broken teeth as well as deep injures to the gums and head.

According to Sbaih, “I was bleeding, but I was able to pull away from three of them and escape. They chased me and threw stones at me until I reached the main road and called the police, who hung up the phone twice before telling me that a police car would come in a minute.” Sbaih was left bleeding for more than half an hour before he was transferred to a hospital by an ambulance that had received his number from the police, who didn’t arrive at the hospital until more than an hour after being called.

Ahmed went to the police station to file a complaint, but says that “when they realized the reason for my presence, they treated me as though I were guilty. The policewoman began screaming at me and tried to justify the police’s late presence at time of the incident, claiming that the police were busy.”

Family home raided in Silwan after settler attack on children