At 2:30 AM this morning Israeli forces entered the village of Bil’in in armored military jeeps and by foot, and proceeded to surround the home of jailed organizer, Adeeb Abu Rahmah. A group of masked soldiers forcefully entered the house without showing a warrant, and arrested Adeeb’s only son, 16 year old Mohammed. Since his father’s arrest 17 months ago Mohammed serves as the family’s sole provider.

During the raid, soldiers violently tried to prevent photographers from filming the raid, beating up local cameraman, Haitham Khatib and causing damage to his camera. 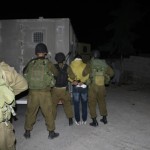 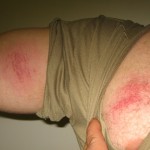 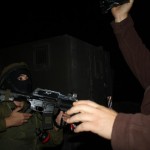 Background
Adeeb Abu Rahmah, 38, a taxi-driver and father of nine and courageous activist, was arrested during one of the weekly protests in Bil’in on July 10th, 2009. An initial decision to release him on condition of avoiding demonstrations was reversed on July 21st, 2009 when the military prosecution appealed. A judge ruled he should be kept on remand until the end of the legal proceedings against him.

Eventually sentenced on June 30th, 2010, he was convicted of “incitement” and “activity against the public order”. These broad military orders are increasingly being used by Israel to criminalize peaceful protest.

Abu Rahmah was initially sentenced to a twelve months term, which was then aggravated to an eighteen months term by the Military Court of appeals in a highly controversial ruling that won the contempt of Human Rights organizations around the world.

Amnesty International, amongst others, noted that “The broad scope of Israeli military orders mean that Adeeb Abu Rahma could be imprisoned solely for legitimately exercising his right to freedom of expression in opposing Israeli policies in the West Bank.” They added that he should be regarded “as a prisoner of conscience who should be released immediately and unconditionally.”