New
Home / In the Media / Nobel Laureates: ‘We are all peace makers, and we believe that no amount of dialogue without economic pressure can motivate Israel to change’

Nobel Laureates: ‘We are all peace makers, and we believe that no amount of dialogue without economic pressure can motivate Israel to change’

Support for divestment continues to grow. Here is the latest amazing statement urging the University of California to divest:

“To the ASUC Senate,

We the undersigned Nobel Women Peace Laureates support your courage and call on you to reaffirm the ASUC Bill in Support of UC Divestment from War Crimes. We stand united in our belief that divesting from companies that provide significant support for the Israeli military provides moral and strategic stewardship of tuition and taxpayer-funded public education money. We are all peace makers, and we believe that no amount of dialogue without economic pressure can motivate Israel to change its policy of using overwhelming force against Palestinian civilians. Last year’s nearly 400 women and children casualties in Gaza, and thousands more injured and killed, were all victims of a well armed military machine allowed to operate unchecked. A delegation of us went to Gaza and saw firsthand the evidence of wholesale killing and destruction. Our hearts grieve for Gaza and we demand that there be no more Gazas. We urge the UC system to take the lead in this direction as has been its tradition, and commend the students who are working to achieve this goal. We reject the portrayals of this action as anti-Semitic, and maintain that it does not make a choice between Palestinians and Israelis, but between universal freedom and oppression. 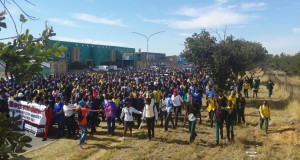