Ussayed Qaddous, 19, who struck in the head with live ammunition and critically injured passed away in the Rafidya hospital in Nablus this morning. Qaddous was shot during a military incursion to his village as the Army attempted to suppress a demonstration. 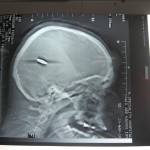 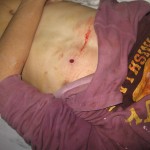 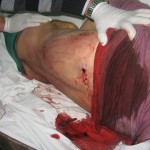 Ussayed Jamal Abd elNasser Qaddous passed away at 4:30am this morning despite doctors’ efforts to save his life. According to eye witnesses Qaddous was shot with live ammunition as soldiers invaded his village after residents demonstrated to protest settler harassment and restrictions of access to their lands. Mohammed Qaddous, 16, was killed in the same incident yesterday, after soldiers shot him in the chest.

Despite the Israeli military’s claims that live ammunition was not used during the incident yesterday, the version given by numerous civilian eye witnesses of unjust use of live ammunition is corroborated by medical findings.

An Xray of Ussayed’s skull taken at the Rafidya hospital in Nublus shows what is clearly a live bullet lodged in his skull. In addition, Mohammed Qaddous’s body had an entry wound in the chest and an exit wound in the back. Such an injury could not have possibly been cause by anything but live ammunition. Less-lethal ammunition, rubber-coated bullets included, can, under no circumstances, cause such injuries, even if shot from point blank.

Background
The demonstrators set out yesterday towards the village’s lands after midday prayer, and were immediately confronted by soldiers who shot bursts of live ammunition in the air. The Army then continued to shoot tear-gas and rubber bullets towards the villagers in an attempt to prevent them from reaching their lands. Following the unprovoked attack on the villagers, who were accompanied by 15 international activists, intermittent clashes ensued.

Roughly two hours later, the Army retreated towards the settlement and demonstrators went back to the village. Shortly after, armored military jeeps invaded the village, arrested three people and raided houses. A few minutes later, live shots were fired at a small group of young men, some of which were throwing stones. The shots resulted in one fatality and one critical injury to the head.