In the early morning on March 2, 2010, Israeli bulldozers started uprooting ancient olive trees in the garden of a Palestinian family in the town of Beit Jala, North-West of Bethlehem, in order to make room for the construction of yet another section of the Apartheid Wall. Wednesday morning, the family, which had already lost a significant portion of its lands when Israel seized them to build the “by-pass road” 60 that connects the equally illegal settlements, found the little playground for the children in the garden destroyed and three olive trees directly in front of the house chopped off. A red cross was painted two meters away from the front door to signal where the Wall is designed to pass. The remaining olive trees had been marked with yellow-tags, to be uprooted another day.

More markings on remaining trees and on the ground announce that soon, the family might lose the rest of its remaining land including the sight of its destroyed playground, and live immediately facing the massive grey concrete Wall.

Between March 2 and March 3, the bulldozers uprooted an overall of 70 olive trees on the lands of the family and their neighbors, rapidly creating facts on the ground before lawyers could challenge the most recent of a series of confusing orders designed to “legalize” the ongoing land theft under Israeli law. According to Israel’s most recent plan, this section of the Wall would seize another 280,9 dunums of Palestinian land on the property of 35 families. 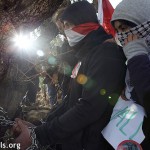 An activist locks himself to an olive tree. 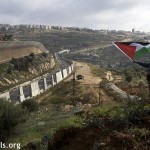 On March 3, the al-Ma’sara Popular Committee and the Holy Land Trust in Bethlehem mobilized a group of Palestinian, international and Israeli activists to attempt to physically stop the bulldozers from continuing their work. Dozens of soldiers, security personal and border police officers spend two hours pushing and dragging the activists up the hill and away from the operating bulldozers, and finally produced an order to arrest anyone remaining on the family’s land after 9a.m.

Today, on March 4, a group of activists was again mobilized to arrive in the early morning hours to protect the remaining olive trees. One activist chained himself to an ancient tree marked for removal, while others formed clusters around this and other trees. As soldiers and police officers gathered on the scene, activists chanted slogans against the Wall and the occupation and replanted two uprooted trees.

After a few hours, the activists learned that a legal decision had been reached that effectively prohibits any further uprooting until the next court order is ruled. Expecting this impending order, activists continue to prepare for further intervention in case that the bulldozers resume their work.