Israeli forces fire upon a demonstration in Gaza

The Israeli army fired four shots and shouted abuse at the group of about 40 Palestinians and internationals who, on Monday 8th February ’10, walked within 50 meters of the Erez border crossing, waving Palestinian flags and chanting demands for justice and an end to the Occupation.

Similar demonstrations have taken place weekly for over a month and this is the closest that the demonstrators got to the border, so far. To mark the occasion two Palestinian flags were placed at the furtherest spots the demonstrators reached. 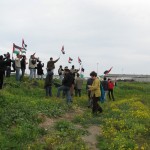 Gazans protest against the siege 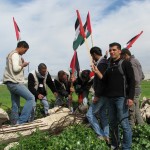 ‘ I don’t think a Palestinian set a foot at this place for a long time’, said a participant.

The organizers, the volunteers form the ‘Local Initiative’ in Beit Hanoun were inspired by the similar peaceful resistance initiatives in Ni’lin ans Bil’in. Their aim is to support people who have farms in the so called ‘buffer zone’, a 300 metre wide belt of Palestinian land which Israelis declared a no-go area. A few weeks ago they even dropped warning flyers reinforcing the illegal ban.

Local Initiative activists are determined to reclaim the right to move freely on every inch of the Palestinian land and to support farmers to continue farming near the border where they often face firing and threats form the Israeli soldiers.

The area of Beit Hanoun, which is located in the North East of the Gaza strip has suffered significant destruction during the Israeli attacks a year ago. Many houses have been completely destroyed and not one building has been left standing anywhere near the border.

This combined with the imposition of a ‘buffer zone’ and a general lack of safety, has made farming extremely risky in this particularly fertile area, where wheat, vegetables and fruits, including famous Gazan strawberries, have been grown for centuries.