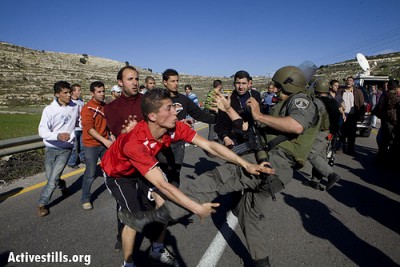 An idf solider kicks Palestinian protester. around 300 Israeli, international and local residents of the villages Deir Nidham and An Nabi salih demonstrated today near the settlement of Halamish (Neve Zuf) protesting the on going expropriation of their land by Israel and used by the Jewish settlements around. Armed settlers from the near by settlement attacked the protesters with stones backed up by the army who used tear gas, stunt grenades and rubber coated bullets in a violent attempt to brake and disperse the demonstration. Protesters managed to block the road for some two and a half hours and 20 of them were injured, amongst them 3 are still in the hospital suffering from medium injuries after being shot by the army with rubber coated bullets from close range. photo by yotam ronen/activestills.org