New
Home / Reports / A Day Of Destruction in Khirbet Tana

A Day Of Destruction in Khirbet Tana

The Israeli army rolled into Khirbet Tana, a village east of Nablus with a population of about 300, in the morning hours on January 10, 2010. They then destroyed about thirty structures, including a school, homes, and shelter for farm animals. This destruction stems from a court ruling issued in February 2009 that cannot be appealed, stating that all structures in Khirbet Tana must be demolished, and the farmers removed from their land. The Palestine Monitor takes a look at the situation that Khirbet Tana faces, and how the villagers are trying to rebuild their lives.

The villagers of Khirbet Tana told the photographer that officials from the Palestinian Authority have visited them, but did nothing to improve their living conditions. To the minimum, Tana requires a good road, tractors (four were confiscated and are being kept at Ariel settlement; the photographer spotted one tractor in the whole village during his visit), a new school, and a popular committee or village leadership. Unlike the villages in, for example, the Hebron area, there is no permanent international presence in Khirbet Tana and the neighboring villages.

All photographs were taken by Brady Ng. 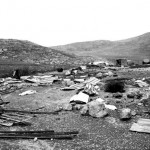 The first sight seen by the photographer as he entered Khirbet Tana was the remains of a tin-roofed home. 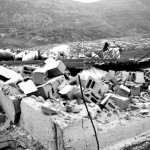 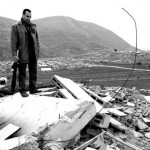 Surveying what’s left of the school. 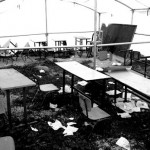 With the original school destroyed, villagers put up a tent to be used as a classroom. The desks, chairs, and blackboard were salvaged from the remains of the school. 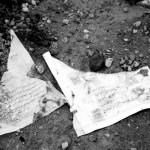 Student worksheets, torn up and strewn about. 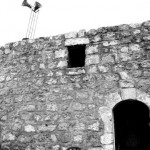 The mosque is one of the few buildings in Tana that was left untouched. 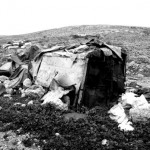 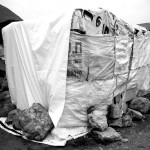 The residents of Tana say that they face demolitions nearly every week. Some have become quite adept at collecting bits and pieces from destroyed homes and rebuilding their tents. 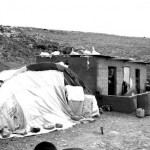 A home that faces demolition, with a tent already put in place beside it. Whenever Israeli soldiers enter the village, the family that owns the house removes all of their belongings from it and places them in the tent, accepting the fact that they may lose their home, but can still survive as long as they retain their property. 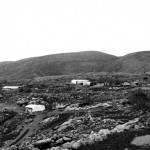 The new “homes” can be easliy spotted — they are the white tents. 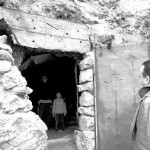 Some people in Tana choose to live in caves, with a little more protection against the elements. 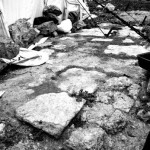 Tanans claim that this stone foundation is 3000 years old, laid there by their ancestors. 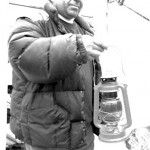 With no electricity in the village, illumination at night is provided by gas or oil lamps. 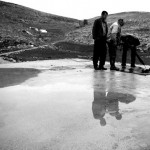 The well in Khirbet Tana, with water drawn from a spring up the hill in the background. 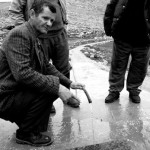 The hose connects the well to the water spring, which is the village’s only source of water aside from rain. 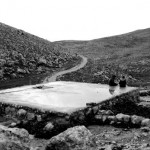 The well used to be uncovered. The villagers decided to build a cover over it three years ago because Jewish settlers came and swam in the well, a common tactic used by settlers to pollute water collected by Palestinians. 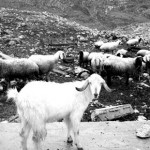 Goats and sheep strolling over the demolished school. 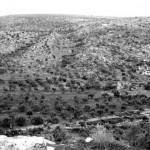 Khirbet Tana’s farmers work for self-sufficiency. The vast majority of their crops are consumed by their families or farm animals. Very little is left to be sold to other villages or cities. 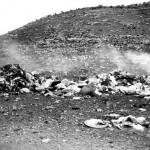 With no trash collection service in Tana, heaps of refuse are left along the road. 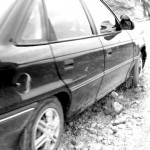 The road leading in and out of Tana is steep and unpaved, and villagers have trouble traveling to other villages for trade. When the photographer visited Tana on a rainy day, the dirt road became a stream of mud, and it took multiple attempts for his vehicle to climb each hill.