The Palestinians have ‘realized,’ thanks to Hilary Clinton, that the US is biased towards Israel. According to the American Secretary of State, negotiations between “the two parties” should resume without preconditions. The Americans have even praised Netanyahu’s “unprecedented concessions!” Gone is the sweet talk of the American president Barak Obama; gone is the euphoria following his “ground breaking” speech in Cairo university.

We are back to square one.

The question that begs for answers is why does America hate us Palestinians? Do the American people really believe that we have no rights even though those rights are enshrined in international law? Does President Obama truly believe that we are only a nuisance?

American hegemonic political philosophy judges a belief by its effects not its causes. The emphasis is on the connection between the truth of statements and their practical applicability by one measure only: how will they work for America? This is American pragmatism. That is, White, liberal American politicians (including President Obama!) are interested in the function of ideas and statements and their effects rather than the sources and conditions of their production.

‘Workability’ and ‘practicability’ are the basis of the justification of positions taken by the American establishment. However that does not take into account the circumstances under which these positions are ‘workable,’ neither historically nor socially. Whatever ‘we’, white liberal Americans, want is justifiable and thus legitimate since it is ‘workable’ and ‘practical’ regardless of the means through which it is achieved. Thus Apartheid, Nazism, Zionism, American occupation of Iraq and Afghanistan can be “easily” justified and sold to CNNized citizens.

Mr. Obama’s policy, and that of his Secretary of State, is a remodeling of the ideas of old American pragmatism re-theorized to suit the requirements and outlooks of the liberal middle-class politicians of the late-capitalist American society—albeit in a black mask this time.

Undoubtedly, this American pragmatism is grounded in a Eurocentric understanding of liberal democracy, which exploits the consideration that Western democracies themselves are full of people who can be persuaded to vote in ways quite opposed to their own real long-term interests, if they can be deceived by liberal rhetoric to opt for short-term goals. Put differently, people can easily be manipulated into ‘choosing freely’ what is clearly contrary to their own real interests. Otherwise, Hitler would never have established the Third Reich. The Israelis would not have voted Netanyahu and Lieberman into power. Thus bourgeois liberalism and neo-liberalism in their pragmatic forms homogenize and hegemonize the society with patchwork expedients while evading the more profound radical critique required for genuine social, and hence political, change.

Socio-historical analyses of such societies reveal that the rich are powerful, and have invented ways of legitimizing what they own, and how they legally hire and abuse the labor of the working class and poorer countries. They legitimize such unjust gains by means of laws protected by institutions, laws that ostensibly appeal to the common good, laws that persuade a big sector of the society to vote against their own interests. Bush was elected twice in spite of the war crimes and crimes against humanity committed by his administration in Afghanistan and Iraq. As some critical thinkers argue, votes in contemporary liberal society are not conferred on each person, as they are supposed to be, but on each dollar, which guarantees an undemocratic outcome. To take the matter further, voting in elections does not guarantee one’s freedom to choose one’s representative in terms of one’s interests. Rather, it is a fundamental part of a system whose rules have been determined by the powerful bourgeois class in its attempts to assimilate its antagonistic class, i.e. the working class. Colonized peoples were never guaranteed the ‘human right’ to choose freely their representatives under the ‘liberal’ colonial system. Many white South Africans participated ‘freely’ in choosing an oppressive racist regime legitimated by the participation of ‘Liberals’ in the parliament. The same applies to apartheid Israel.

An important question arises: how could each individual have such rights when all social primary goods — including income and wealth — are distributed unequally? Liberal bourgeois freedom based on ‘peace’, ‘wealth’, and ‘freedom’ — exploitation is never mentioned — is the answer America has for us, an answer that precludes historical awareness; or rather, an answer that requires historical and political amnesia. It is an answer that incorporates two ideologies: capitalism and liberal democracy.

Can we, however, ignore the historical fact that the basis of the contemporary liberal society was a bloody revolution, i.e. the French Revolution? What about the American revolutions itself? Is there real ‘free press’ and ‘enlightened public opinion’ to which we Palestinians can appeal to recognize the horror and suffering that have been inflicted on us? Put differently, did not US main-stream media mislead public opinion around issues like apartheid in South Africa, Nicaragua, Chile, the assassination of Lumumba and Allende, the support given to Mobutu and other reactionary regimes in Africa and the Middle East? And now the Palestinian cause?

‘Persuasion’, from a pragmatic point of view, then, plays a fundamental role in the creation of the liberal society. Technically, persuasion is the means through which one gets to ‘pluralism’ in which there is no exclusion of ideas whatsoever. However, from this perspective, any opposing or radical points of view should work from within the bourgeois liberal system as the only existing ‘legitimate’ one. Rejecting the system and its ideological basis by revealing and opposing its exploitative features leads to ‘illegitimacy’ and exclusion. If one, in other words, is not ‘persuaded’ by the logic of the American intervention in the Arab World and Afghanistan, one still has to accept it; otherwise, one is considered ‘undemocratic’ even if hundreds of thousands of civilians are being killed by such intervention.

Liberal ‘persuasion’, then, is nothing but a ‘distorted communication’—as Jurgen Habermas would call it— and implies the acceptance of the views of those who have the power to hegemonize and ‘persuade’ in the realm of knowledge/power. This argument is not a rejection of democracy as such, but rather a rejection of the exploitative basis of liberalism and pragmatism which insist on reducing any other radical opinion to ‘one of us’ within the realm of ‘pluralism.’

What is always pushed to the back of any serious argument with main-stream American ideologues is that the foundation of contemporary liberal capitalist societies has literally been achieved through the exploitation of millions of workers, the deaths of millions of indigenous peoples, and the brutal murder of some other millions in two world wars. So why insist on the right of return of 6 million Palestinian refugees? Why lament the death of more than 1500 civilians, including 434 children, during the Gaza massacre? Obama never offered a single word of sympathy for those children.

By contrasting what he calls ‘situational consciousness’ of ‘First and Third Worlds’ in terms of Hegel’s master/slave dialectic, the American intellectual Fredric Jameson argues that “the slave knows what reality and the resistance of matter really are whereas [the] master is condemned to idealism.” Drawing on this Hegelian analysis, Jameson concludes:

“It strikes me that we Americans, we masters of the world, are in something of that very same position. The view from the top is epistemologically crippling, and reduces its subjects to the illusions of a host of fragmented subjectivities, to the poverty of the individual experience of isolated nomads … This placeless individuality, this structural idealism which affords us the luxury of the Sartrean blink, offers a welcome escape from the ‘nightmare of history,’ but at the same time it condemns our culture to psychologism and the ‘projections’ of private subjectivity. All of this is denied to third world culture, which must be situational and materialist ….”

This is exactly what American policy is all about – a policy of domination and interests. That is, it is a reflection of an ideology of a particular class with particular interests represented in specific perspectives, i.e. White, neo-liberal pragmatism.

American “strong political discourse,” to use Bourdieu’s words, coincides with neo-liberalism. Their strength is due to the fact that they have on their side all of the forces of a world of relations of power, a world that they contribute to making what it is. The Palestinians, like native Americans, are a “surplus population,” like Black South Africans, “powerless and useless savages”. Give them a Bantustan, surrounded by walls (The Wall), where “our allies (us)” do not have to see them; a Bantustan they will be allowed to call an independent, viable state. After all, which American citizen knows the difference between Palestine and Pakistan!

No need, then, to wonder why Mr. Obama, and his Secretary of State, hate us. We are no match for the macho, powerful, White Ashkenazis. During the 1967 war, Edward Said noted that Americans kept asking “how are we doing?” We, Arabs and Palestinians, are not part of that WE. We are the “THEM;” the “Other.” We occupy a part of what Fredric Jameson would call American “political unconscious.” Our death is never counted; the death of half a million Iraqi children from sanctions, like the death of 434 Palestinian children during the Gaza massacre, is “collateral damage,” whereas the 9/11 victims are individuals with families, names, and “powerful narratives.”

Dr. Haidar Eid is an independent political commentator based in Gaza. He contributed this article to PalestineChronicle.com. 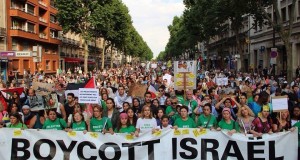 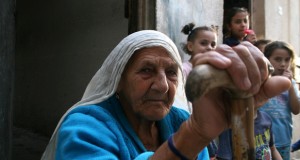