New York, NY, December 4, 2009 – 25 New York City human rights advocates caught the Israel Business Leaders Delegation to the United States by surprise this morning with a noisy protest outside their “breakfast reception amidst the Leviev jewelry collection” at the Leviev store on Madison Avenue. Groups worldwide have conducted a successful campaign for the boycott of Leviev’s companies due to their involvement in Israeli settlement construction in violation of international law, and human rights abuses in the diamond industry in Angola.

In addition to businesspeople, among the guests present at the breakfast was TV personality Dr. Ruth Westheimer who tried unsuccessfully to avoid notice as she left. Guests watched from the second floor of Leviev’s store as protesters chanted and sang outside. Some attempted to defend Israel’s dismal human rights record when they left. The protest came as Leviev is struggling in court in Israel to save his company Africa-Israel from bankruptcy and from creditors, and to retain ownership.

Ethan Heitner from Adalah-NY explained, “By holding this breakfast at Leviev, the Israel Business Leaders Delegation and the American-Israel Friendship League have endorsed Israeli settlements. People should not be attending lavish breakfasts hosted by Leviev when his settlements are cutting off Palestinian villages from their farmland and impoverishing them, and Palestinian activists like Mohammad Othman from Jayyous are being imprisoned for protesting against them.”

The breakfast at Leviev’s store came at the end of a three-day New York program for the delegation, organized by the America-Israel Friendship League that featured business and government VIPs from Israel and the US, including guest speakers like AOL CEO Tim Armstrong, Loews President James Tisch, Homeland Security Secretary Janet Napolitano, Israeli Ambassador Michael Oren, and Israeli Government Ministers Gideon Sa’ar and Uzi Landau.

In addition to Leviev, other Israeli companies featured in the delegation are deeply involved in Israel’s apartheid policies. Michael Federmann, Chairman of the Board of Elbit Systems Ltd. spoke in the “Homeland Security Roundtable,” though the Norwegian government divested from Elbit due to its provision of surveillance equipment for Israel’s wall that cuts through the West Bank, separating Palestinians from their farmland. Another speaker was Moshe Gaon, Chairman of the Board of B. Gaon Holdings. B. Gaon Holdings is one of the owners of Ahava, the Israeli cosmetics company that has been the subject of a successful worldwide boycott campaign launched by CODEPINK over Ahava’s exploitation of Dead Sea minerals from the Occupied West Bank, in violation of international law. 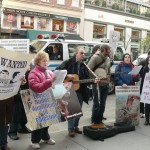 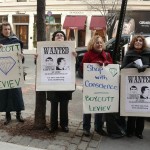 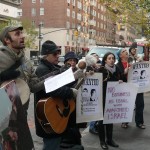 Alexis Stern from Adalah-NY explained, “The visit of this Israeli business delegation to the US was shameful, because there should be no business as usual with Apartheid Israel. Many Israeli companies are directly or indirectly involved in supporting Israel’s oppression of the Palestinian people. They should be boycotted, not celebrated.” Hundreds of Palestinian civil society organizations have called for a worldwide movement of Boycott, Divestment and Sanctions (BDS) against Israel, modeled on the anti-apartheid movement against South Africa, aiming to end Israeli abuses of Palestinian rights. The BDS movement gained momentum following Israel’s winter assault on the Gaza that killed 1400 Palestinians.

UNICEF, Oxfam, The British Government and major Hollywood stars have all distanced themselves from Leviev. The investment firm BlackRock, pension giant TIAA-CREF and the Swedish government recently sold off their shares of Leviev’s company Africa-Israel, though BlackRock and TIAA-CREF denied they did so due to his settlement construction. The Norwegian government has also been asked to sell its pension holdings in Africa-Israel over ethical concerns.