In a symbolic reenactment of the event that changed the world 20 years ago, demonstrators from all over the West Bank managed to topple a section of Israel’s wall, 8 meters of reinforced concrete in height, near the infamous Qalandiya Checkpoint. 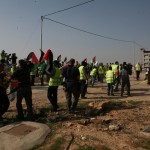 Demonstrators gather near the Wall 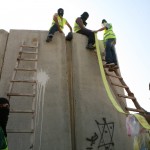 Palestinian activists prepare to tear down the Wall 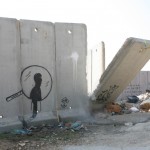 Activists take down part of the Wall 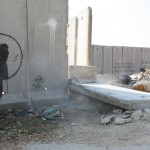 The Wall falls on a historic day

On the 20th anniversary of the fall of the Berlin wall, hundreds of demonstrators from across the West Bank convened in Qalandiya to demand the immediate dismantling of Israel’s wall. In a dramatic turn of events, protesters managed to tip-over a a section of the wall, opening a passage in this strategic and symbolic location at the entrance to East-Jerusalem.

Exactly twenty years ago today the Berlin Wall came crumbling down in two days that changed the world forever. Today, a wall twice as high and five times as long is being built by Israel in the West Bank, in blatant contempt of international law, to separate Palestinians from their lands.

Despite the International Court of Justice’s advisory opinion of 2004, that pronounced Israel’s wall illegal, and called for its removal, no significant changes on the ground were made. After the demonstration ended, Mushir Ghazzal, an organizer with the popular struggle coordination committee, said that “Today’s events prove that we must not wait for Israel to end its occupation on its own – we Palestinians should do it with our own two hands. Like the Berlin Wall at the time, Israel’s wall seems to us an undefiable reality, but twice this week it has caved in to the pressure of ordinary people fighting for their rights.”

The anniversary of the fall of the Berlin Wall has been declared an international day of action against Israel’s barrier. Last Friday, mass demonstrations were staged simultaneously in three villages along the path of the wall, including in Ni’ilin where protesters managed, for the first time ever in the West Bank, to topple the 8 meter tall concrete wall there.