20 years to the fall of the Berlin wall: Demonstrators toppled 8 meters tall concrete wall in Ni’ilin

Three protest marches were held today in the West Bank to mark the 20th anniversary to the fall of the Berlin wall, which has been declared an international day of action against Israel’s barrier. In Ni’lin, the 300 demonstrators managed to topple a part of the eight meters tall concrete wall that cuts through the village’s land. Following the direct action, the army fired scores of live rounds at the demonstrators. 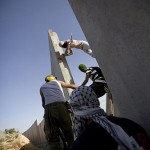 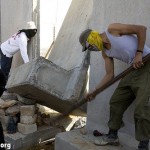 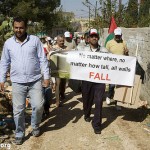 No matter how tall, all walls fall

The concrete wall in Ni’lin – five to eight meters (15 to 25 feet) in height – has only recently been laid on the path of the wall cutting through Ni’lin’s lands, in addition to the already existing electronic barrier and razor-wire.

Since the Wall was built to allow more land to annexed to the nearby settlements rather than in a militarily strategic manner, demonstrators have been able to repeatedly dismantle parts of the electronic fence and razor-wire surrounding it. The section of the Wall in Ni’lin is the only place along the route of the barrier where a concrete wall has been erected in an attempt to deal with the civic, unarmed campaign waged by the village in protest of the massive land theft that will enable the expansion of the illegal settlements of Modi’in Il’it and Hashmonaim.

Since Israel began its construction in the year 2002, This is the first time demonstrators succeed in toppling a part of Israel’s barrier which is a concrete wall. One of the demonstrators, Moheeb Khawaja, said during the protest: “Twenty years ago no one had thought the monster that divided Berlin into two could be brought down, but in only two days in November, it did. Today we have proven that this can also be done here and now. It is our land beyond this wall, and we will not give up on it. We will win for a simple reason – justice is on our side.”