The village of Azzoun, near the northern West Bank city of Qalqilya, was invaded and placed under curfew by the Israeli Occupation Forces on the 9th September 2009. The village was surrounded by Israeli soldiers with checkpoints established at the major routes in and out of the village, and there were reports of live ammunition being used in the village’s streets.

Two ISM activists arrived in Azzoun around 4.30pm and with the help of local Palestinians managed to enter the village to make contact with those inside. The curfew had been in place for several hours at this stage. All shops were ordered to be closed, people were told to stay indoors, and depending on the duration of the curfew (this had not been communicated to the villagers) people would not be allowed to leave even to go to school, to the hospital, etc… Young people returning from university were forced to enter the village on foot through the surrounding fields and hills.

After speaking with the villagers, the activists proceeded to walk through the deserted streets of the village. The Israeli presence was quickly obvious, with jeeps regularly passing through the roads and some stationed at significant sites, including the mosque. The soldiers here seemed sheepish and nervous, unable to provide a good reason for the curfew or to find a commander to explain the army’s actions.

At around 7pm the army withdrew from the village and removed their checkpoints. The villagers had not been informed of the end of the curfew and many stayed inside from fear of reprisals should the army still be present somewhere in Azzoun.

Azzoun’s inhabitants regularly suffer from military invasions, curfews and restrictions of movement by Israeli Occupation Forces. While ISM activists saw no sign of live ammunition during their three hours in the village, many residents reported previous use of tear gas, sound bombs, rubber-covered steel bullets and live ammunition against the Palestinian population. Commonly, curfews are put in place for any number of arbitrary reasons, most often accusations of stone throwing.

Azzoun is one of a number of villages in the region between Nablus and Qalqilia in the north of the West Bank that has been subjected to settler attacks and army curfews recently. It is surrounded by several large illegal Israeli settlements – Ginnot Shomeron, Ma’ale Shomron and Alfei Menashe in particular – and the Apartheid Wall, which already almost entirely surrounds the village, has been tightening in the name of the ‘security’ of these illegal settlements, squeezing Azzoun into a smaller and smaller territory.

Yesterday’s aggressive army actions came in the context of a number of settler attacks against Palestinians across the West Bank, from Susiya in the south to Yris and Asira al Qibliya in the north. These attacks have been seen as an aggressive message from the settlers to the Israeli government as it prepares a response to international pressure to at least temporarily freeze the construction of these illegal settlements on stolen Palestinian land. 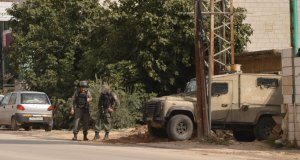