Ni’lin demonstrates against the Apartheid Wall

Around 250 Palestinian residents, alongside international and Israeli solidarity activists, gathered in Ni’lin to demonstrate against the Apartheid Wall around 12:30. Demonstrators marched towards the site of the Wall chanting slogans against the Occupation. Israeli forces used tear-gas grenades, sound bombs, tear-gas canisters and live ammunition against the unarmed protesters. Despite the excessive use of weapons from the Israeli army, no demonstrators were injured. The protest finished around 4:30.

After a prayer was held in the Ni’lin olive groves, demonstrators marched towards the Wall with tires and flags. Before reaching the Wall, Israeli forces stationed on Ni’lin’s land shot tear-gas canisters at the protesters. A smaller group proceeded to the 8-meter high concrete blocks that run the length of where the previous fence was built. 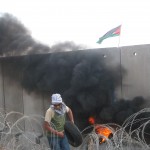 Ni’lin residents protest against the theft of their land 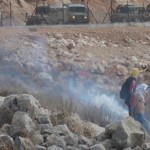 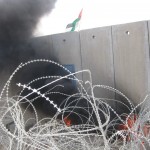 Burning tires are put near the 8-meter high cement wall

Construction of the cement blocks began less than 2 weeks ago, further disconnecting Ni’lin residents from their land. While access to the Ni’lin land past the Wall is completely blocked by Israeli occupation forces, the concrete wall prevents residents from being able to see their land in many spots along the Wall.

Several protesters placed burning tires on the foundation of the concrete blocks. One Palestinian activist, with the help of several others, climbed the Wall to place a Palestinian flag at the top. Additionally, several Ni’lin residents threw paint at the military jeeps.
While the smaller group was at the site of the Wall, the rest of the demonstrators were closer to the village in the olive groves. Israeli forces continuously shot tear-gas grenades and canisters at demonstrators. The army shot several bullets of live ammunition towards protesters.

Eventually, both groups were pushed up a hill by Israeli soldiers firing tear-gas. At around 4:30 in the afternoon, demonstrators went back to the village to prepare for the Ramadan meal, Iftar.