New
Home / In the Media / Israeli to UN: Palestinian detainees kept in ditches

A member of the Public Committee Against Torture in Israel (PCATI) testified in Geneva on Tuesday before a United Nations investigation team looking into the Israeli offensive in Gaza about half a year ago.

Attorney Majd Bader, an Arab Israeli, told the committee that Palestinians detained by Israel during Operation Cast Lead were held in detention under ‘disgraceful” conditions and were subjected to violent Shin Bet interrogations and constant threats.

Speaking to Ynet, Bader said that during his testimony he spoke of the “acute problems of Gazans who are being held in Israeli prisons.”

“Some of them said the IDF held detainees in ditches that had been prepared in advance; 50 to 70 people were squeezed into ditches two to three meters (6.5-10 feet) deep and some 50 meters (164 feet) wide,” he said.

The PCATI representative said the detainees testified to being held handcuffed and blindfolded with no access to restrooms, food or water.

As for the interrogations by the Shin Bet security service, Bader said these included the use of physical and verbal abuse and threats on the detainees and their families.

“Some detainees said they were allowed very little sleep for days on end and claimed they were handcuffed in a painful way,” he said.

Bader further complained that the detainees are prevented from meeting their lawyers and that their families could not visit them due to the Israeli blockade on Gaza.

The attorney expressed his hope that the committee would publish clear findings “that will prevent the recurrence of human rights infringements on the part of both sides.”

Bader said he believed Israel’s decision not to cooperate with the committee was a mistake. “The government should not have boycotted the committee if it was confident in the moral and legal justification of its ways,” he said.

“Israel should have established an independent investigative committee to examine the allegations.” 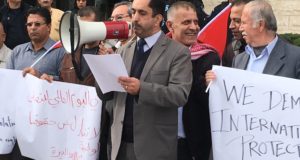