International day of solidarity with East Jerusalem residents facing eviction or demolition of their homes. Demonstration in front of the Israeli embassy in Copenhagen.

At 8.30 in the morning on Monday 13th of July Scandinavian activists showed their solidarity with the Palestinians in East Jerusalem facing eviction or demolition of their houses by putting up 6 tents in front of the Israeli embassy in Copenhagen.

The 6 tents raised in front of the Israeli embassy in Copenhagen symbolize Palestinians in East Jerusalem threatened with eviction or demolition of their houses. 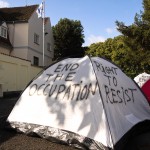 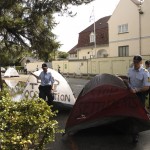 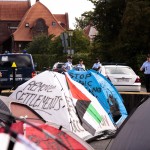 A tent for the Ghawe family and one for the Hanoun family in Sheikh Jarrah as well as each one tent for the Palestinian neighborhoods Silwan, Ras Khamis/ Shu’fat, The Old City and At-Tur. On the wall facing the embassy was a big banner with the words “No To Ethnic Cleansing” and a poster for the Al-Kurd family.

The residents of Sheikh Jarrah neighborhood have used the tent as a symbol for their struggle since the Al-Kurd family got evicted from their home in November 2008.

Another two eviction orders have been given to the Hanoun Family and the Ghawe Family, both family fathers face imprisonment if they do not hand over the keys to their houses.

Later the symbol has spread and is now used in Silwan were 88 homes are threatened with demolition to make room for a park leading to the new settlement “Ir David”. More than 50 Palestinian homes have been demolished in Silwan during the past 10 years.

Also Ras Khamis are using the tent as symbol for the threat demolition orders cause. 55 houses or more than 500 persons are in danger of becoming refugees if Israeli plans are carried out.

Common for all the above mentioned neighborhoods is that the residents are originally refugees that had to flee their homes in 1948.
UN reports estimate that 60.000 Palestinians in East Jerusalem are in danger of administrative house demolitions or evictions.

The many house demolitions and evictions are all part of the ethnic cleansing of East Jerusalem.

The International society have to act now. Have to share the responsibility for the ongoing catastrophe.