On Monday, the 13th of July, around 35 Chicago activists picketed the Israeli consulate in response to a call to action from Palestinian residents of occupied East Jerusalem currently facing house eviction or demolition at the hands of Israeli authorities. When one demonstrator attempted to deliver an eviction notice to the staff at the consulate, similar to ones Palestinian families receive when Israel informs them that they are to be evicted or their homes demolished, he was prevented from even entering the building. 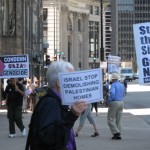 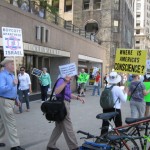 At 12pm, the solidarity activists demonstrated outside the building holding signs against the occupation and calling for a halt to the hundreds of eviction and demolition orders pending for Palestinian communities in occupied East Jerusalem. Palestinians regard East Jerusalem as their capital city, and the Israeli authorities are making no secret of their plans for depopulating Palestinian residents from the region.

As the picket was ending, one demonstrator attempted to enter the lobby of the building to deliver an eviction notice to the consulate staff. The activist was prevented from even entering the lobby by Chicago police as well as building security. None of the staff agreed to come down to receive the eviction order.