Monday, July 13th 2009, 5am: In perhaps the largest campaign of its kind in Chicago’s history, over a dozen activists dropped 88 banners across Chicagoland this morning decrying Israel’s policies of evicting or destroying Palestinian homes. Each banner represents one of 88 Palestinian homes in the occupied East Jerusalem neighborhood of Silwan that have received demolition orders from Israeli authorities.

Today’s banners were dropped as part of an international day of action on July 13th in solidarity with Palestinian families facing house evictions or demolition in the West Bank and occupied East Jerusalem. In addition to Chicago, demonstrations and actions are planned for San Francisco, New York City, London, Paris, Copenhagen, Glasgow, and Jerusalem. 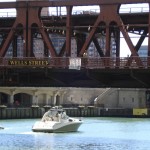 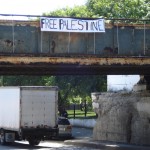 Chicago’s action saw banners being hung from highway overpasses, bridges, and from the roofs of buildings. Some of the banners read, “End the occupation of Palestine,” or “From Chicago to Palestine, communities are facing eviction,” and call for onlookers to “Support. Resist. Fight.”

Under an illegal occupation, Israeli policies of evicting Palestinians or destroying their homes are often used as acts of collective punishment, contrary to international law.

As refugees and people living under occupation, we are asking people to help us with our struggle for our rights. It is unbelievable that in the 21st century, Israel’s authorities can get away with demolishing the homes of Palestinians in order to build settlements or national parks. The price we and our neighbours have to pay is too high, we are faced with two impossible choices – either we throw our kids out on the street or we go to prison. If we lose our homes, there is nowhere else for us to go, the only option we have is to live in tents

In Chicago, the activists also tied their message of solidarity with Palestinians facing eviction to solidarity with Chicago communities that are being displaced as part of the city’s plans for the 2016 Olympic bid.