On March 30th, about 30 Palestinian villagers from Ni’lin, supported by international and Israeli solidarity activists, held a protest to commemorate Land Day. The nonviolent demonstration was stopped by Israeli forces on the outskirts of the village, far away from the construction site of the wall. Three military jeeps parked in the main street of the village to block the protest, shooting tear gas, sound bombs, and rubber coated steel bullets against the demonstrators. 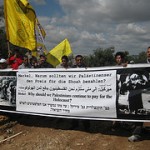 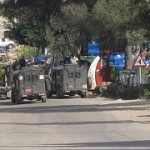 The demonstration started at the main square of the village and continued towards the field where the Israeli army blocked their path. Several speeches were given and when the demonstrators tried to continue the army claimed that the village fields was a closed military zone. The Israeli commander also argued that villagers in Ni’lin do not have the right to demonstrate.

Demonstrators then tried to enter the field from other spots near the clinic and were subsequently attacked by soldiers with sound bombs, tear gas and rubber coated steal bullets. At the end of the demonstration some protesters managed to reach the illegal Apartheid Wall, damaging a small part of it.

This Land day demonstration remembers the six Palestinans murdered by the Israeli army for protesting against land confiscation in 1976. Ni’lin villagers know well that land confiscation is still a reality in Palestine. Since 1948, Ni´lin residents have lost more than 85% of their land to confiscation from Israeli authorities and illegal settlement building. Since the resistance against the Apartheid Wall began in Ni´lin in May 2008, four youth have been killed by Israeli forces in nonviolent demonstrations. Nineteen people have also been shot with live ammunition and over 600 have been injured by other army weaponry.