On the 2nd of April, dozens of fishermen from the Salateen area in Beit Lahiya in the far north of Gaza, staged a march towards the coast to protest against recent Israeli naval attacks.  The demonstrators were joined by the Director of the General Syndicate of Marine Fishers, Nizar Ayash, as well as Palestinian activists from the Beit Hanoun Local Initiative. The demonstration was supported by volunteers from the International Solidarity Movement (ISM), amongst them two international activists abducted by Israeli naval forces last November. 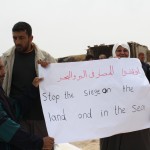 Demonstrators hold signs against the seige 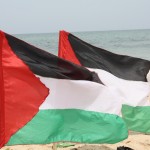 Palestinian flags planted on the beach 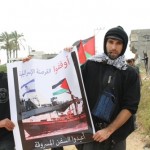 The Israeli navy has intensely escalated its attacks against Gazan fishermen since the recent onslaught on the Gaza Strip.  In just the past three weeks, at least two fishermen have been injured by gunfire, 16 have been abducted (some of them tortured and later released) and seven fishing boats have been stolen without being returned.  Several other boats have also reportedly been damaged by Israeli gunfire.  Most of the fishermen are from the Salateen area, some of whom now face bleak situations – in the wake of losing their homes during Israeli bombing raids, they have now lost their sole means of income in an area already greatly impoverished by the continued Israeli siege on Gaza
Beit Lahiya Demonstration Fishermen Gaza 2009-04-03
ISM Media Group