New
Home / In the Media / Gaza wears a face of misery: interview with Philip Rizk

Gaza wears a face of misery: interview with Philip Rizk

Philip Rizk, 27, a freelance journalist and blogger who has been reporting from Gaza since 2005, was arrested by Egyptian security forces after a pro-Palestinian rally in Cairo on February 6.

He was released a few days later without being charged.

While in Gaza, he filmed The Palestinian Life, a documentary highlighting non-violent means of resistance against the Israeli occupation.

The film is premiering at the London International Documentary Festival on April 4. Here are excerpts from an interview Rizk gave to Al Jazeera shortly before the film’s debut. 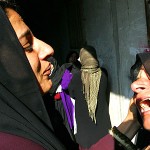 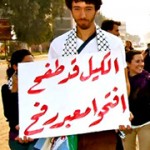 Rizk: Gazans function with whatever they have available 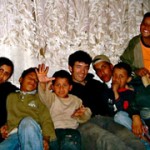 Al Jazeera: Why were you detained and subsequently released by Egyptian authorities at the rally in Cairo?

Rizk: On February 6, I was part of a demonstration of 15 protesters against the Israeli siege on the Gaza Strip. We started from the outskirts of Cairo and walked in the direction toward Gaza. Some 12km later, we were stopped by security forces that singled me out from the rest. I was forced into their car; they blindfolded me and I had no idea where I was going. One of the protesters was a lawyer who had a car, so he and others followed the car which took me.

The police set up security checkpoints to slow them down and eventually they lost my trail.

The security men took me to three holding stations. By the time I arrived at the third destination, they gave me a number, 29, told me to forget my name and that’s where I stayed for four days. They interrogated me about everything I had ever done in my life: where I was born, who I knew … everything.

They didn’t charge me with anything, but while I was being interrogated, they accused me of being an Israeli spy. They also said I was dealing weapons to Hamas. So it seemed like they were trying to figure out what I was all about to put a file together on me.

You’ve been reporting from Gaza over the past couple of years and one of the first journalists allowed access through the tunnels. Are Palestinians still using them?

Rizk: Gazans function with whatever they have available
I lived in Gaza from 2005 to 2007 and worked there for an NGO called the Foundation for Relief and Reconciliation.

Gaza wears a face of misery and the living conditions are unimaginable. Unless you visit, you wouldn’t be able to picture the kind of agony Gazans have to live through on a daily basis. They function with whatever is available.

I was completely shocked when I returned in the summer of 2008. I discovered these tunnels myself and I couldn’t believe how out in the open they were. In the past, I had heard the entrances were from inside people’s living rooms, under their beds, or underneath a table, making it hard to find if ever an Israeli soldier would search their homes.

Last summer, I came across hundreds of tents, and underneath each of these tents were entrance points to hundreds of these tunnels. Egyptians and Israelis were well aware of them as these tunnels were all the people had as a means of transporting food and goods.

At least 85 per cent of the people are dependent on food aid. If the amount of aid was reduced, they would starve.

Refugee camps receive flour, oil and rice as aid and without these donations; they would not be able to survive.

They may be living but they’re not alive. There isn’t work to do; they’ve lost their dignity because of lack of work caused largely by the siege. Fathers have nothing to provide for their kids and in front of their wives they feel ashamed because there’s nothing for them to do; they can’t even provide their families with the most basic of needs.

The ironic thing is that the main providers for employment are the NGOs being funded by international organisations, which then serve to help keep the rest of the population alive. In the meanwhile, politicians don’t look for actual solutions to the conflict.

What doesn’t the media report on?

More than 1400 people died in Israel’s latest war on Gaza. But on a regular basis, Gazans die because of all sorts of causes that we don’t hear sufficiently about in the media. The sewage system is horrible, water is polluted and diseases are becoming an increasing phenomenon in Gaza.

Hospitals can’t cope because they face electricity shortages; a lot of Palestinians are in desperate need of kidney dialysis, the kinds of diseases that are out there are getting worse, it’s simply not a livable space.

The line between the meaning of life and death becomes very thin. As a student, you can spend your whole life trying to do well in school, get good grades – but all that effort goes to waste because there is no future for the class valedictorian.

Everyone alike is left completely powerless without hope and potential future. I’m even shocked at how well kids can even perform in these schools, considering how they live in a constant state of war.

There have been reports of tensions between Palestinians and Israeli settlers in Hebron. Is this a potentially explosive situation?

Rizk says the line between the meaning of life and death becomes very thin in Gaza
What happens in Gaza really stays in Gaza because some things aren’t reported. Israel has done so well at controlling the flow of information; they control everyone who goes in and out of the strip. It is easier for foreigners that are able to come in with NGOs working in Gaza. As far as the media goes, Israel hands out the permits and from mid November till the end of January or beginning of February, Israelis weren’t allowing anyone in, there was a blackout of information.

Another thing is how there isn’t so much of an interest from media organisations around the world to keep reporting on Gaza.

To them, there’s nothing new about the situation when in fact, the story there is constantly unfolding, breaking news is Gaza’s middle name. But because this breaking news always holds the same kind of information, no one cares to report on it.

So your documentary is to shed light on the situation in Gaza?

My documentary is a response to what I witnessed in Gaza and the West Bank and they are stories that don’t make it out in the media. Palestinians are so easily identified as terrorists, wearing balaclavas, holding a gun or firing a Qassam rocket.

But they’re really everyday people just trying to make the best of their lives, putting their kids through school, finding a job, doing well in their final exams.

One thing I’ve noticed in the media is that the theme of violence is always associated with stories coming out of Gaza.

Why not focus on stories of non-violent resistance? While some Palestinians return Israeli violence with further violence, the vast majority does not, and the Arabic word for such everyday acts of non-violent protest is sumoud, which means steadfastness, perseverance.

I needed to go to Palestine to understand what was going on there. Studying and reading about it didn’t make sense until I saw the wall, the settlements and physical occupation. After doing so, and going through the kinds of experiences I went through, I wanted to translate what I saw into the medium of film.

I’m also planning a film in West Africa, and then I’d like to focus on Egypt, which is a real police state. There’s red tape everywhere so it’s going to be a challenge.

For more information on Rizk’s documentary