Friday, 17 April 2009, Bil’in Village: A resident has been killed by Israeli forces during a demonstration. Basem Abu Rahme, 29 years of age, was shot in the chest with a high-velocity tear gas projectile. He was evacuated to Ramallah hospital in critical condition, where he died of his injury. According to eyewitnesses, Basem was on a hill with several journalists to the side of other demonstrators. Soldiers opened fire from 40 meters, aiming directly with the tear-gas projectiles.

The tear-gas projectile, labeled “40 mm bullet, special/long range” in Hebrew has also critically injured American national, Tristan Anderson at a demonstration in Ni’lin on 13 March 2009 when he was shot in the head from 60 meters.

According Michael Sfard, the lawyer representing the village of Bil’in, “The Israeli supreme court has ruled 3 times that the route of the Wall is illegal and needs to be moved. However, to date not a meter of the Wall has been rerouted.”

Basem Abu Rahme is the 18th individual to be killed by Israeli forces during a demonstration against the Wall. 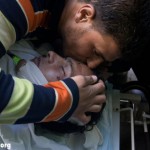 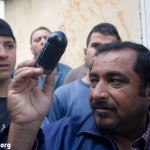 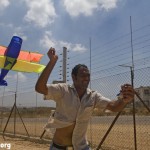 December 28th, 2008:
Mohammad Khawaja, age 20
Shot in the head with live ammunition during a demonstration in Ni’lin against Israel’s assault on Gaza. Mohammad died in the hospital on December 31st 2009.

December 28th, 2008:
Arafat Khawaja, age 22
Shot in the back with live ammunition in Ni’lin during a demonstration against Israel’s assault on Gaza.

July 30th, 2008:
Youssef Ahmed Younes Amirah, age 17
Shot in the head with rubber coated bullets during a demonstration against the wall in Ni’lin. Youssef died of his wounds on August 4th 2008.

July 29th, 2008:
Ahmed Husan Youssef Mousa, age 10
Killed while he and several friends tried to remove coils of razor wire from land belonging to the village.

February 2nd, 2007:
Taha Muhammad Subhi al-Quljawi, age 16
Shot dead when he and two friends tried to cut the razor wire portion of the wall in the Qalandiya Refugee Camp. He was wounded in the thigh and died from loss of blood after remaining a long time in the field without being treated.

February 26th, 2004:
Muhammad Da’ud Saleh Badwan, age 21
Shot during a demonstration against the wall in Biddu. Muhammad died of his wounds on March 3rd 2004.

February 26th, 2004:
Abdal Rahman Abu ‘Eid, age 17
Died of a heart attack after teargas projectiles were shot into his home during a demonstration against the wall in Biddu.