As we conclude our conference today, we remember our friend and fellow in struggle, Bassem Abu Rahma, who was killed by the Israeli army last Friday during the weekly peaceful demonstration. Our hearts and prayers go out to his family and we wish them peace in these hard times. Our thoughts and prayers are also with Tristan Anderson and his family. Tristan, an American solidarity activist, was shot and seriously injured by the Israeli army last month while he was visiting Ni’lin village.

The Fourth Bil’in Conference for Non-Violent Resistance is held this year at a critical stage of the Palestinian-Israeli conflict. As Israeli violence and oppression against the Palestinian people to force it into submission has intensified, and an extremist Israeli government ascended to power, the Palestinian leadership is unacceptably divided and weakened.

Palestinians in Gaza are still suffering from the impact of the barbaric Israeli attack on them in Operation Cast Lead and the inhumane blockade imposed on the Strip for years now. In the West Bank, the Israeli authorities have intensified its ethnic cleansing efforts especially in the Jerusalem area, through house evictions, systematic killings, detentions, settlement building and the construction of the Apartheid Wall. Through an elaborate control system of more than 600 military checkpoints and hundred of military orders of house demolitions, land confiscation and blockade, Israel is actively creating facts on the ground that shall render any peaceful settlement of the conflict impossible.

Facing this painful reality, the Palestinian people must continue and develop their popular resistance to protect their basic rights to life and freedom and realize their aspirations of a peaceful future, like the rest of the world.

The participants of the Fourth Bil’in Conference for Non-Violent Resistance are committed to the rights of the Palestinian people through: supporting and promoting popular forms of resistance throughout the occupied Palestinian territories, encouraging the Palestinian leadership and civil society to assume a more active role in the popular resistance movement, promoting the culture of resistance and the Boycott, Divestment and Sanctions (BDS) movement against Israel, unifying the Palestinian people geographically and politically through involving Palestinians the Gaza Strip in the popular movement and helping overcome the blockade and isolation, and raising the awareness of the daily realities of Palestinian suffering under the occupation through field visits.

The participants of the Conference emphasize the importance of the popular resistance as an effective strategy to resist oppression. Recently, several popular resistance campaigns throughout the occupied Palestinian territories have been launched or expanded. The participants discussed the developments in Ni’lin, Al-Ma’sara, the Jordan Valley, Southern Hebron and Bil’in as models of effective popular resistance. This is complemented by important developments in the BDS movement on the international level. In France and Canada, law suits have been filed against those who benefit from the occupation and settlements. The New York-based boycott campaign against settlement-builder, Lev Leviev, has spread to the UK and Norway.

Based on the discussion in the Conference and the workshops, the participants have decided to adopt the following unifying strategies as a basis for the work on the popular resistance movement:

1. Holding organizing conferences within the different regions active in BDS to coordinate BDS campaigns and initiatives.

2. Based on the resolution adopted by the World Social Forum this past January, it was decided to hold the Global BDS Day of Action on March 30 of each year, which also coincides with Land Day.

2. Coordinating between the Palestinian civil society and human rights organizations in Europe and the US involved in prosecuting Israeli war criminals.

1. Creating a coordination committee including representatives of the popular committees who attended the conference in order to facilitate the implementation of the conclusions of the Bilín Annual conference on Popular Resistance and to support the popular resistance.

2. Increasing the coordination between the Popular Committees.

3. Providing accessible data on the activities of the Palestinian popular resistance movement.

4. Reaching out to media, focusing on success stories of the popular resistance movement.

5. Sharing experiences and learning from other popular movements around the world.

6. Differentiating between the role of the popular movement and that of the Palestinian Authority political parties and factions.

· Building an international movement in solidarity with Palestine

1. Improving coordination of international civil society groups working in solidarity with the popular nonviolent resistance, through transversal initiatives like the working groups of the World Social Forum for Palestine.

2. Strengthening communication, advocacy and lobbying capacity of the solidarity movements focusing on respect of international law and human rights in Palestine, and putting more pressure on foreign governments and politicians.

3. Joining the BDS movement, promoting fare trade relationships with Palestine, rejecting the upgrading of cooperation agreements between the European Union and Israel and asking for suspension of such agreements till Israel violates international law.

4. Pressing governments and parliaments worldwide to take a position against the siege on Gaza, holding Israeli war criminals accountable in international tribunals (including a Russell Tribunal for Palestine) and highlighting the voice of Israeli anti-occupation groups who denounce those crimes.

The participants also demand the following:

· On the Palestinian level

1. Achieving national unity, which is a prerequisite for national liberation.

2. Serious efforts by the Palestinian president and government to implement the ruling of the International Court of Justice of July 9, 2004 and the subsequent UN General Assembly resolution.

3. Supporting the popular resistance movement by the Palestinian leadership and officials and taking a firm stance against the Judiaization and ethnic cleansing of Jerusalem as well as the expansion of the settlements and the construction of the Apartheid Wall.

4. The endorsement by the Palestinian national factions of the popular resistance, namely BDS movement.

· On the Israeli level

1. Strengthening the relations with Israel peace groups that join the Palestinian popular resistance against the occupation and oppression.

2. Rejecting any and all forms of normalization and isolating those involved in it.

· On the International level

1. Institutionalizing the relations between the Palestinian popular resistance movement and international solidarity activists and inviting more activists to join and support the movement.

2. Calling on all the international organizations, unions, peace activists and civil society institutions to present the Palestinian narrative as they witnessed first hand and combat the Israeli propaganda that dehumanizes the Palestinian people.

Finally, the participants of the Conference decided that Bil’in International Conference on Non-Violent Resistance will be held in April of each year. 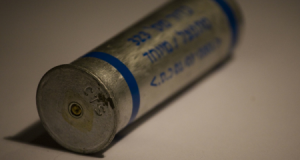 More deaths and injuries from US tear gas in Palestine, around the Middle East, and in Oakland 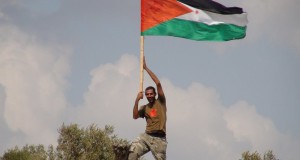