On the 31st of March, at 10:30am, villagers in Beit Liqya marked Land Day by planting trees near the graves of two villagers killed by Israeli forces during demonstrations against the Apartheid Wall in 2005.  Beit Liqya is located in the Ramallah district of the central West Bank.  Around 200 villagers, supported by Israeli and international solidarity activists, moved towards the Apartheid Wall, which is built on village land.

Around 50 boys from the local youth committee beat drums and marched in procession to the graves of two boys killed by Israeli forces.  Jamal Jaber, 15 years old, and Uday Mofeed, 14 years old, were shot with live ammunition during nonviolent demonstrations against the construction of the Apartheid Wall in 2005.  Villagers planted trees near their graves, connecting the martyrs’ deaths to the continued brutality of the Israeli occupation and remembering the murder of six Palestinian demonstrators in 1976, which is commemorated every year on Land Day. 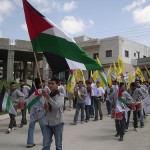 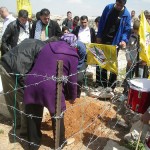 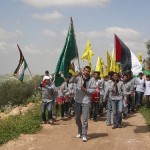 After the trees were planted, three Israeli soldiers standing nearby began shooting tear gas and rubber bullets at the crowd and firing live ammunition into the air.  Some of the village youth responded to the soldiers by throwing stones.  One Israeli solidarity activist was hit in his back with a rubber bullet.