On the 21st of March, organizers kicked-off the Jerusalem Capital of Arab Culture festival despite an official ban and heavy police repression by the Israeli Authorities.  The festival, which is supposed to continue through 2009, has been banned in occupied East Jerusalem.  Organizers were determined to defy the ban in order to celebrate Palestinian heritage in the city.  20 participants were arrested for taking part in the activities, and dozens more detained.

Israeli police and soldiers were heavily deployed in Jerusalem’s old city and in the surrounding neighborhoods.   In the early morning of the 21st, at least two organizations that were hosting events were raided by Israeli forces.   At 1pm, hundreds of balloons with the national colors of Palestine were released over the city.  Several of the balloon releasers were subsequently arrested. 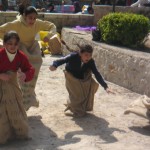 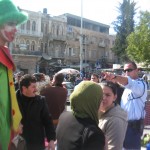 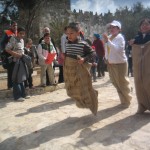 Additionally, children’s games, traditional dabke dancing, and musical acts were conducted near Damascus Gate and in the main streets of the old city.  Israeli police harassed several of these activities, while letting others continue unhindered.  At around 3:30pm, a group of clowns began leading a crowd drummers and celebrators through the old city.  More than two dozen police and soldiers surrounded this group, detaining the clowns along with three international solidarity activists.  After around half an hour in the police station, everyone was released.

Palestinian political, cultural, and civil organizations say that activities celebrating Jerusalem as a capital of Arab culture will continue throughout the year in East Jerusalem.  Several other Palestinian cities are also hosting events as part of the festival, including Hebron, Bethlehem, Nazareth, and Ramallah.