New
Home / In the Media / Aftermath: ‘the only BMW shop in Gaza’

Aftermath: ‘the only BMW shop in Gaza’

In this new series of personal testimonies, PCHR looks at the aftermath of Israel’s 22 day offensive on the Gaza Strip, and the ongoing impact it is having on the civilian population.

Nasser Al ‘Amoudi, with his biker’s jacket and sunglasses, embodies the essence of a car enthusiast. For years he has been the proud owner of the only BMW spare parts shop in the Gaza Strip. People would travel from every corner to purchase second hand parts from his shop. Now Nasser’s workshop and garage, which were worth $300,000 before the Israeli army destroyed them during their latest offensive, lie in tatters, and his financial security has gone.

Al ‘Amoudi BMW Spare Parts is situated on a main street running through the Salateen area of Beit Lahiya, northern Gaza. This area was one of the worst affected during Israel’s ground offensive – hundreds of houses and greenhouses were completely destroyed in Salateen, thousands of trees were uprooted, and there are still 100 families living in a tent camp just a few metres away. This predominantly fishing community has sustained many Israeli incursions over the years but the scars of the latest one are all pervasive and have made the area almost unrecognisable to its residents. Even the cemetery with its cracked gravestones and deep tank tracks, was not spared. 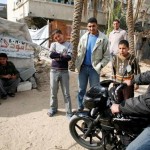 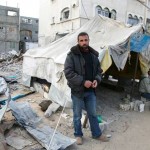 Nasser Al ‘Amoudi, outside the symbolic tent erected on the site of his BMW shop 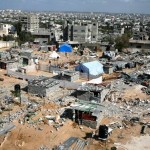 An overview of the Salateen area, badly destroyed by Israeli military apparatus

“This land belongs to me and my family and we have had this business for 22 years,” says 38-year-old Nasser, his hand leaning on the edge of the tent he has erected on the site of his shop. “I worked in the garage when I was a small boy, and I took over from my brother when I was old enough. We had customers from Gaza City, from Khan Yunis, and Rafah. This was the only place to find good used spare parts for BMW cars. All of Gaza knew this shop.”

Nasser used to have friends in Germany whom he did business with to secure the spare parts, but everything collapsed with the closure of Gaza’s borders two years ago: “People were still coming here before the war, but business had slowed down, almost to a standstill. Gaza has been closed off from the outside world for two years, and it’s impossible for businesses like mine to function under those conditions.”

The economic blockade and closure of Gaza’s borders since June 2007 has had a devastating impact on the Strip’s economic sectors. Most production facilities have ceased operations and the import and export of goods are severely limited. Israel’s policy of collective punishment has left the territory unable to secure basic foods, medicines, or other supplies and the result has been a skyrocketing of poverty rates and unemployment.

During the offensive, while Nasser sheltered in his home in Shati refugee camp with his wife and three children, Israeli fighter jets, helicopters, naval vessels, and ground tanks pounded Salateen. His garage and workshop were levelled by Israeli military bulldozers around the 14 of January 2009, when many of

the local residents had fled the area. “I drove back here on my motorbike on the first day of the ceasefire, on 18 January 2009,” says Nasser. “There was absolutely nothing left. Years of work, just gone.”

Piled up around the refugee tent on Nasser’s site, are the crumpled metal bumpers of BMW cars. Nasser has tried to salvage whatever he could but the tent is little more than a testament to the human spirit. “I’ve set up this tent with the old sign from my shop as a symbol, even though I have no goods to sell,” Nasser adds. “Just to let the world see what happened to me…”

During the 22 day offensive Beit Lahiya suffered extreme levels of devastation and the resulting crisis is still affecting all aspects of life. Civilians like Nasser Al ‘Amoudi and others, continue to be denied their economic, social, cultural, civil and political rights.

Meanwhile, the European Union (EU) is considering upgrading its trade relations with Israel under the EU-Israel Association Agreement, which offers Israel preferential terms in its trade with the EU. Article 2 of the EU-Israel Association states that the relationship between Israel and the EU should be based on respect for human rights and democratic principles, as a core part of the Agreement and as a precondition for economic cooperation.

In light of Israel’s latest actions in the Gaza Strip, and continuing breaches of international law, PCHR is calling on the EU-Israel Association Council to reconsider Israel’s request for a significant upgrading of relations, and to hold Israel to account for its continuing violations of international law and the human rights clauses within the Agreement. Upgrading the Association Agreement gives Israel tacit approval to continue violating its contractual obligations and makes the EU complicit in these acts.

Over 120 industrial and commercial workshops were completely destroyed by Israeli Occupation Forces between 27 December 2008 and 18 January 2009, and at least 200 others were damaged, as well as some of Gaza’s largest factories producing soft drinks, concrete and other basic items.

The high civilian death toll and the extensive destruction to public and private property indicate that one of the objectives of the Israeli political and military establishments was to cause the maximum possible damage in Gaza. As Nasser Al ‘Amoudi, rearranges the metal sign hanging from his tent, it is apparent that the Israeli army achieved that objective.

“What is the point of addressing the international community about this issue?” asks Nasser. “No one seems to care. I will try to rebuild my shop. What else can I do? Where else can I go? I just hope that this will not happen again in Gaza.”