— VICTORY!! —
Cardiff Students Against War is ENDING OUR OCCUPATION of the Large Shandon lecture theatre, Cardiff University Main Building! We’re about to leave, march around campus to declare our victory, and make our continued presence known to the university community. Banners and megaphones, BOOKS not BOMBS!

Following the open letter to Vice Chancellor David Grant, the BOOKS not BOMBS demonstration outside the Student Union and the subsequent occupation of the Large Shandon, Cardiff University has divested all shares from BAe Systems and the aerospace arm of General Electric! They have instructed their external fund managers to avoid future investments in the arms trade, and have promised to raise the issue of an ethical investment policy at the next Council Meeting on May 18th. They are also willing to discuss the provision of surplus computers and resources to institutions in Gaza.

The victory comes after three days of occupation which has been inundated with messages of support from all over the country, as well as further afield. This has included university staff, students and societies, local Plaid Cymru politicians and groups, activist groups such as CND Cymu, No Borders South Wales and South Wales Anarchists, and has had extensive press coverage, from the local papers and student publications to Indymedia and the BBC. We are extremely proud to have received a message of solidarity from Noam Chomsky! 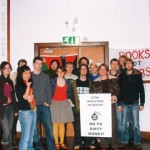 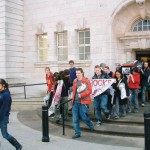 We see this as the beginning, not the end. The occupation has attracted considerable interest and support from the Cardiff University community, and has succeeded in raising awareness of the effects of the arms trade and the horrific situation in Gaza. Cardiff Students Against War will continue to campaign on these issues, and to make sure that the university doesn’t go back on its promises.

So well done to everyone who has been involved!!

But it’s not over yet. The campaign will continue because we believe that Cardiff University should be doing more for Gaza, such as facilitating scholarships to Gazan students and boycotting Israeli products in protest at the treatment of Palestinians by the IDF, and the settlers occupying the West Bank.