New
Home / Journals / I’ll tell you how he died

I’ll tell you how he died

By Eva Bartlett in Gaza
ingaza.wordpress.com

A good, brave, and very funny man was killed yesterday as he loaded the body of a civilian twice-killed into an ambulance. Emergency medical workers, Arafa Hani Abd al Dayem, 35, and Alaa Ossama Sarhan, 21, had answered the call to retrieve Thaer Abed Hammad, 19, and his dead friend Ali, 19, who had been fleeing the shelling, when they were themselves hit by an Israeli tank’s shell.

It was after 8:30 am on January 4th, they were in the Attattra region, Beit Lahia, northwestern Gaza, around the area of the American school bombed the day before, killing a 24 year old civilian night watchman inside, tearing him apart, burning what remained.

Squealing in pain, right foot amputated and shrapnel lacerations across his back and body, Thaer Hammad tells how his friend Ali was killed. “We were crossing the street, leaving our houses, when the tank fired. There were many people leaving, not just us.” Hammad stops his testimony, again squealing with pain. For the past two days, since the Israeli land invasion and heightened bombing campaign began, residents throughout Gaza have been fleeing their houses. Many haven’t had the chance to flee, have been caught inside, buried alive, crushed. The doctor continues the narrative. “After they were shelled, Thaer couldn’t walk. He called to Ali to carry him.” The rest goes: Ali had carried Thaer some distance when Ali was shot in the head, a bullet, shot from an unseen soldier in the direction from which they fled. Ali dead, Thaer injured, and people fleeing, the ambulance was called.

When Arafa and Alaa arrived, they managed to load Thaer into the ambulance, and were working on getting Ali’s body to the clearly-marked vehicle when the shell came. Ali lost his head, killed twice. Alaa is riddled with shrapnel over his body and to his groin. Arafa’s lung came out. 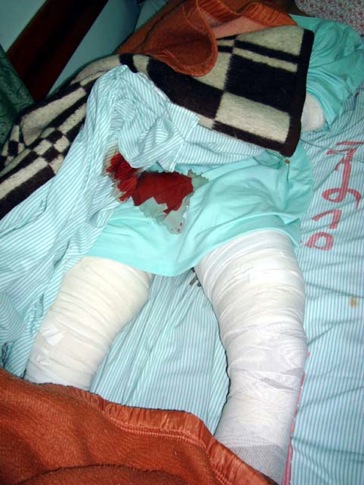 His funeral was hurriedly held, a procession, a burial, and the traditional mourning tent. The tent was shelled, mourners inside. Another medic tells me of Arafa’s brother on the phone, calling the news radio station: “we’re being shelled, someone come to get us.” 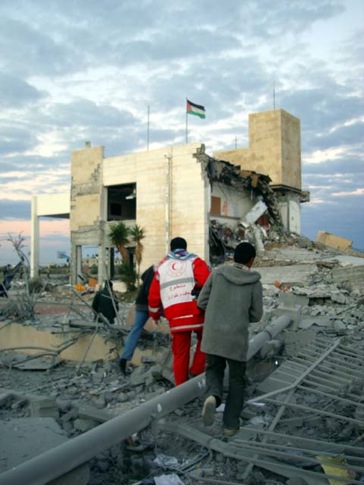 A science teacher by profession, Arafa had volunteered as an emergency medic for 8 years. He was delightful, warm, had a nice singing voice, and was not at all shy about being silly. I remember him stomping ridiculously around the now-vacated Jabaliya PRCS office (Israeli soldiers have taken over the area) saying he was hungry, very hungry, and chomping down on the bread and cheese that we had for a meal.

I had the privilege of working one night with Arafa, of seeing his professionalism and his humanity. “He wanted to die like that, helping our people,” Osama, a fellow medic told me. Not a martyr complex, so engineered by living with death, occupation, invasions, humiliation, and injustice for so long, but a dedication to his work, to people.

His killing has since been followed by those of 3 more emergency medics.