27th December 2008 – Hundreds of Palestinians took to the streets of Nablus today in a series of demonstrations against the massacre of besieged Palestinians in Gaza – the greatest number of Palestinians to be killed in a single day since the beginning of the Israeli occupation. 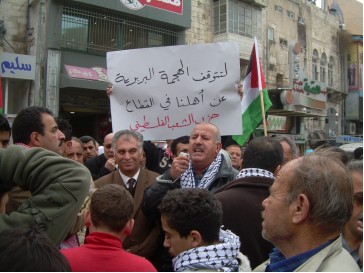 Upon hearing of the more than 30 Israeli airstrikes that, starting at 11am on Saturday 27th December, killed more than 195 Gazans and injured at least 200 more, spontaneous demonstrations erupted in the centre of Nablus – at Martyr’s square – calling for Palestinians to unite to resist against these attacks. 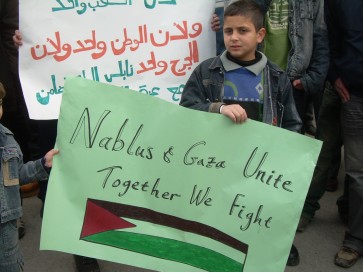 “In this martyr’s square, in front of the blood of all of our martyrs, we call on all [political] parties to return to the negotiating table to discuss unity”, called one speaker from the Palestinian People’s Party.

Attended by representatives from many political parties and civil society associations, the protestors marched through the streets of Nablus, chanting “Gaza and the West Bank are one!”.

Another speaker cried “Wayn il Arab? Wayn? Wayn?” (Where is the Arab? Where? Where?), drawing attention to the failure of Arab countries to support Palestine in its struggle under Israeli occupation.

Many speakers, from political parties and civil society organisations called in the Palestinian Authority to immediately freeze all relations with Israel.

Hundreds of Palestinians took to the streets once more at 3pm, bearing placards calling for Nablus and Gaza to unite and fight together. Up to 500 demonstrators marched through the city centre and the old city, to express their anger and despair at the massacre, while calling for Palestinians to unite to fight the Israeli occupation.

Similar demonstrations have taken place in cities throughout the West Bank, Jordan and countries around the world. A general strike has been announced for the entire West Bank for Sunday 28th in protest against the strike.