At noon on Friday 19th December, around 150 protesters from the village of Ni’lin, joined by international and Israeli solidarity activists, gathered in the village to protest against the construction of the Apartheid Wall being built on Ni’lin’s land. 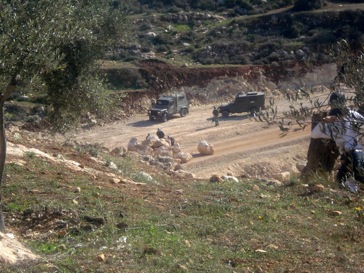 This demonstration took the form of a prayer protest on land close to the construction of the Wall. The demonstrators then tried to reach the construction site in order to physically stop the construction where they held up shoes on sticks towards the Israeli forces, following the Iraqi journalist who threw his shoes at US President George Bush. 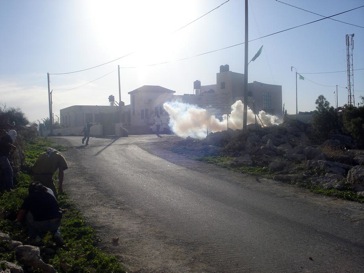 Protesters then assembled road-blocks leading to the construction site in order to delay the building of the Apartheid Wall. 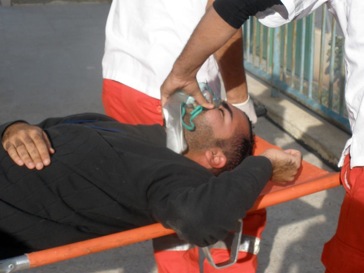 Even though international and Israeli activists where present, live ammunition was fired by the Israeli Occupation Forces (IOF).

During the demonstration the Israeli soldiers damaged several buildings in the village. Two of the buildings had windows broken, one of them had four tear-gas cannisters shot though a window. A third house had a water pipe and its solar cells destroyed by the soldiers firing at the property.

A lot of teargas was fired in the demonstration and the violence from the soldiers resulted in ten injuries. Seven people were injured due to rubber-coated steel bullets and three from gas inhalation. 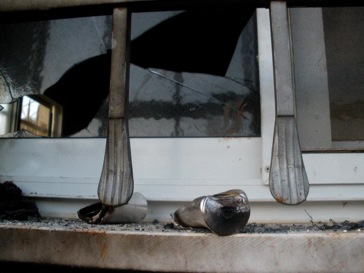 Two members of the press were injured, one of them was shot two times in his knee by rubber-coated steel bullets, despite clearly wearing a vest with “PRESS” written on it.

The other man was a TV reporter who fainted from tear-gas inhalation. When medicals tried to help him they also where targeted with tear-gas which resulted in one of ambulance personnel losing consciousness. Israeli forces were also witnessed targeting the ambulance that was hit with several rounds of tear-gas causing damage to the vehicle.