On 2nd December, more than 200 Palestinian, international and Israeli activists marched to the Palestinian lands on which Israeli settlers are preparing to dump solid waste. 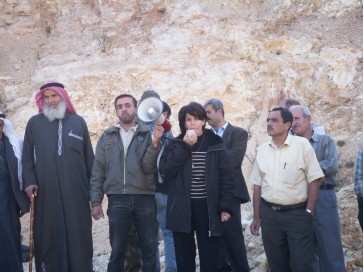 Organised jointly by the Palestinian Ministry for Environment; the Nablus coalition of political parties; Nablus governorate together with the villages of Deir Sharaf and Qusin, the demonstration called for an end to plans of Israeli settlers from nearby Qedumim settlement to construct a waste dump on Palestinian land. 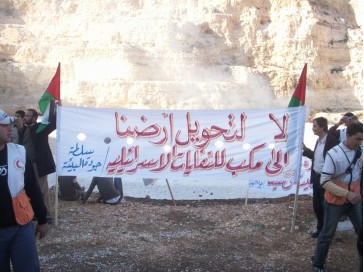 Children carried placards stating “We Want Freedom and a Pure Environment” – outlining the two main political objections to the nascent waste dump. The first is the refusal to tolerate the attempted land-grab by the settlement, with the municipalities from Qusin and Deir Sharaf affirming that the land in question has not been sold to Qedumim council – a claim currently being made by the council. 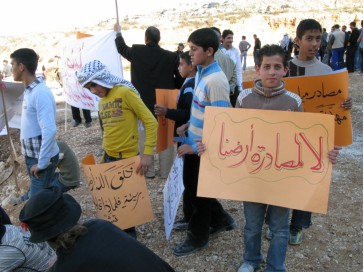 The second objection is to the existence of a waste dump on the site, which lies just 100 metres above the Deir Sharaf aquifer – the source of 40 percent of Nablus’ drinking water. Whilst the settler groups in question claim the dump will be for “sanitary landfill”, which will not pollute the water below, the same claim was made in 2005 when Qedumim council first dumped waste on the site, but the reality was that a whole range of waste, from paper to foodstuffs to tyres, was dumped there. “The type of rock here is very porous”, said Amjad Ibrahim of the Palestinian Ministry of Environment. “The water will leech through very quickly”. 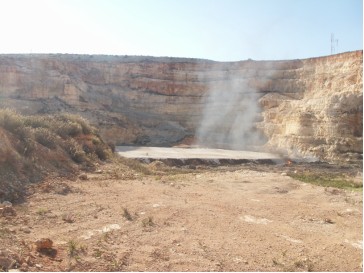 20 dounums of the land have been prepared by work crews employed by the settlement, but the grand scheme is to eventually take 400 dounums (100 acres) for the landfill site, with waste to be dumped there for 20 years. No waste has been dumped on the site since April 2005, when in just two days of dumping, mountains of waste were created. “Can you imagine what it will be like after 20 years?”, asks Mr Ibrahim.

Whilst the dumping of waste on the site in 2005 was stopped very quickly as a result of media and political pressure, residents are worried that this time won’t be so easy. Whilst under international law, it is illegal for an occupying power to dump its waste in occupied lands, (much as it is illegal to settle population in occupied lands), settler groups have negotiated around this obstacle by claiming the site is also for Palestinian waste – a claim that all Palestinian authorities refute. It is through this fabrication, however, that the settlers have supposedly been granted a license to dump waste at the site – a license that, along with land ownership papers, they have failed to produce. Nonetheless, concern over the possibility that Israeli authorities have granted settlers license to dump waste in Deir Sharaf has led to the issue being included in the articles of concern for the Palestinian peace-talks negotiations team.

Villagers, moreover, have vowed to continue to take action against the waste dump – refusing to allow their land to be stolen and their water supplies polluted.