Israeli authorities announce that Azzun is to be walled in

Azzun villagers’ fears were confirmed when they were delivered a notice that Israeli authorities intend to build a wall between their village and the main road that runs along its northern edge – Road 55. 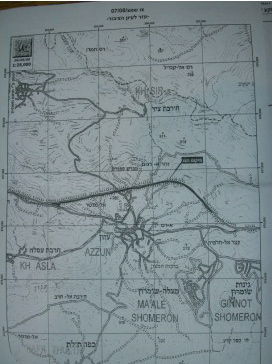 At 6:30pm on Friday 28th November Israeli military vehicles entered the village, with personnel delivering the notice of the planned wall to the Sheikh at the central mosque, asking him to pass it on to the municipality. The documents give “prevention of stone throwing at Road 55” as the official reason for the construction of the wall, with maps showing the route of the wall extending along the southern side of Road 55 from Izbit at Tabib to the illegal Israeli settlement of Maale Shomeron. 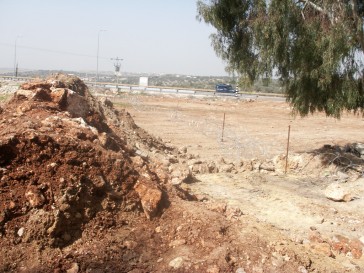 Residents inform that a high-ranking member of the Israeli Civil Administration visited the villagers and farmers on 30th November advising them that the wall will be made from wire, but would not say how tall or how far from the road the wall would be. He also advised residents that the wall will not block the main entrance to the village. The maps provided to the villagers, however, show that the planned wall will completely close the main entrance of Azzun – preventing villagers from directly accessing the main road to Nablus and Qalqiliya. This entrance is regularly closed by Israeli military forces by roadblocks and razorwire – part of the collective punishment frequently visited upon the villagers during Israeli military incursions. 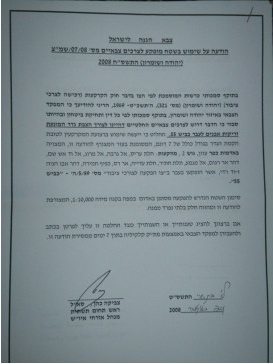 Residents have been given just one week to lodge complaints against the impending wall construction – complaints that need to be accompanied by current ownership documents. Any residents wishing to make a complaint must first then request new proof of ownership papers from Israeli authorities. Many in the village are cynical that the complaint system will have any effect at all. “For sure this [complaint] route will not work. Always they say ‘you can complain’, but this is just to make it legal. They will make it [the wall] and they will say it is for security reasons”.

Villagers have good reason to by cynical. When the Apartheid Wall was first planned to the East of Azzun, residents were told they had two weeks to lodge their complaints. Before the two weeks were up, construction on the Wall was started, under the pretext that if the court decision was against the Wall, then the work would be reversed.

Israeli authorities have advised villagers that the new wall will confiscate 7 dounums of village land. Many in the village are also suspicious of this figure, as the original plans given for the Eastern Wall were for 25 metres in length. Once bulldozing began the Wall spanned more than 100 metres.

While authorities are claiming the new wall is to prevent stones being thrown on the Israeli-controlled road, no such measures have been taken against illegal Israeli settlements where stones thrown at Palestinian cars cause many injuries. Also, note residents, a wire wall, such as those imposed on Marda and Haris in the Salfit region, would do nothing to prevent stones being thrown.

The new wall will, however, prevent farmers from easily reaching their lands that lie on the north side of Road 55, while with the main road to Nablus destroyed by Israeli forces years ago, transportation and travel will become increasingly difficult and expensive.