On 8th November 2008, at 1:15am, more than 20 Israeli soldiers invaded the village of Burqa, near Nablus, throwing over 100 sound bombs throughout the area. The soldiers entered fifteen houses in the village, forcing villagers at gunpoint to fingerprint mysterious documents written in Hebrew. 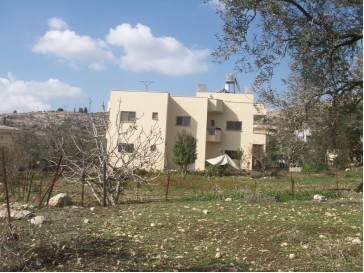 Gharib Saif stands in front of his house, looking slightly embarrassed as he recalls the night almost one week ago when Israeli soldiers invaded his home, dragging all of his family out into the cold night, with a gun to his wife’s head. At 2am the soldiers woke the family with sound bombs, before entering the house through the small convenience store the family run underneath. Gharib had been out harvesting olives for many days, and explains that he was very, very tired. Initially, explains his wife, Nihaya, four soldiers entered the house, screaming that they wanted to make the house into a “nuktah” – a military command post set up inside a Palestinian house when a village or city is invaded. Instead, after they were joined by a further eight soldiers, the soldiers targeted her husband. Putting a gun to both his and his wife’s heads, soldiers told him to fingerprint the a piece of paper, blank but for a few words in Hebrew at the top. “They didn’t say why”, recalls Nihaya, “they just kept saying ‘Sign! Sign!”. 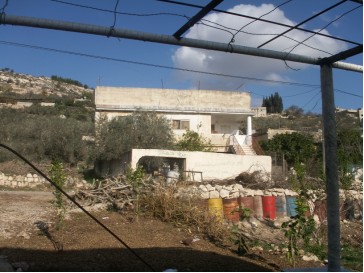 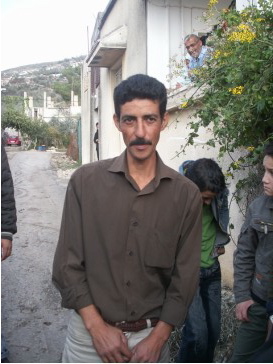 The family were left to wonder what it was that had just been done to them in the 45 minutes during which the operation had taken place; and why it was that they were then instructed to keep the front door of their home open for the next two and a half hours.

This same process took place in home after home, most of them along the main street of the village. Next in line was the home of Hussam and Tharwat Saif, across the road from Gharib’s house, where soldiers again woke the family with sound bombs before invading the house. There four soldiers ransacked the house, turning over all of the furniture, breaking some of it, as they had done in Gharib’s house.

Tharwat and her five children were forced to stand by and watch as the soldiers demanded Hussam produce his identification, taking a photo of him holding it next to his head. Tharwat recalls that the soldiers then took Hussam outside and beat him, before taking him back inside and forcibly fingerprinting him.

At yet another house across the street, belonging to Ahmad Zeki, the soldiers stole 1000 shekels while undertaking the same operation there.

No one in the village has any notion as to why the men were fingerprinted that night. “We search, we search”, says Mohammad Masoud of the village municipality. “We want to know exactly what was written on the paper, but no one in those houses can read Hebrew”.

While being forced to fingerprint documents they do not comprehend is new for villagers in Burqa, home invasions are not. Seemingly every family in the village has a story about Israeli soldiers invading their homes.

Abu Sami tells about how four years ago his house would be invaded and occupied by Israeli soldiers with great regularity – up to three times each month. One night his wife gave birth to one of their children, Kais, soldiers invaded the house, forcing all of the family, including the mother and the five hours old baby into the street, where the temperature was close to zero degrees. After this incident the baby became so sick that he had to be taken to hospital for treatment everyday for six months. “That’s what happens here”, he says. “That’s what happens to everyone”.

Um Eyad, mother to a large family, suffers regular home invasions by Israeli soldiers. “Every time they enter the village they come to my house”, she says. “And every time they break something. Now they have broken two wardrobes; the washing machine and the refrigerator”.

Another young student from the village, Mohammad, tells about how four months ago, Israeli soldiers invaded and occupied his house for two hours, keeping the family locked in the kitchen.

It seems that until the land of Homesh is returned to the villagers, as they have begun demanding in weekly demonstrations, there will be no peace for the residents of Burqa.