Members of the Brighton-Tubas Friendship and Solidarity Group and International Solidarity Movement (ISM) are joining local Palestinians in Hebron who are defending a house under attack by Israeli settlers from Kharsema settlement. 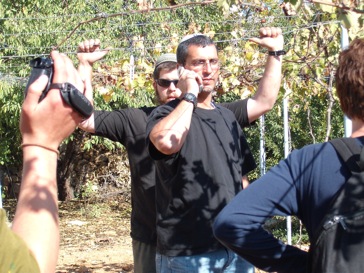 They are sleeping at the house of a Palestinian family who live close to the ruins of the Federman Farms settlement outpost that was evacuated last week by the Israeli army. Settler violence and harassment of Palestinian residents has increased this week after settlers clashed with Israeli police over the eviction and reoccupied several Palestinian homes.

Last week armed Israeli settlers came to the house and tried to set fire to it, and since then the Palestinian family have been subjected to threats, intimidation and stone throwing.

Last night, three members of BTFSG slept in the house. This morning 15 settlers, carrying guns, came to the house. First the settlers attacked a 65 year old Palestinian woman, who was walking with the aid of a zimmer frame. The settlers pushed her over and kicked her with the result that she had to be taken to hospital. They then turned on the internationals. The international who was filming the attack on the woman, a 23 year old man from Brighton, was pushed to the ground and kicked in the head. His glasses and the camera were smashed. He has gone to a Palestinian hospital for medical attention. An Israeli woman from Rabbis for Human Rights, a group campaigning against settler violence, was assaulted and her face so badly cut that she was taken to hospital. Other members of BTFSG were pushed, punched and kicked.

To justify their attacks, the settlers have fabricated a story that the Palestinians stole 3 of their mules and have threatened to return.

There are at the moment 8 internationals in the house ready to film the threatened attack, and about 10 Palestinians.