On November 20th at 1pm a demonstration for the children of Ni’lin against the construction of the illegal annexation wall gathered in the centre of the village. The demonstration was organised to mark the Universal Children’s Day 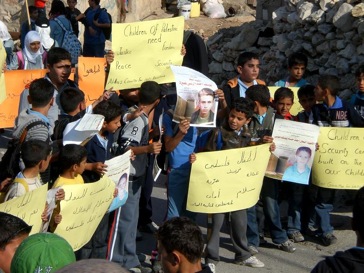 The children of Ni’lin had made signs saying “no to the wall” and “we will never forget what you did to Yousef and Ahmed”. The last, referring to 10 year old Ahmed Mousa, who was shot and killed by Israeli soldiers at close range with live ammunition earlier this year close to the construction site of the annexation wall outside of Ni’lin. Yousef Amaira, 17, was killed as the Israeli army shot him twice in the head with rubber-coated steel bullets as they attacked Ahmed’s funeral. 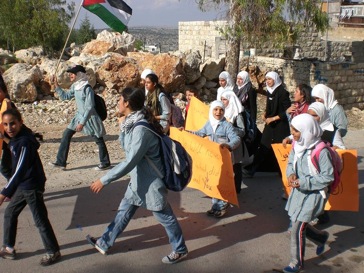 The demonstration was joined by international and Israeli solidarity activists. As the demonstration non-violently moved towards the construction site of the wall, Israeli soldiers started shooting teargas straight into the crowd of protesters. They were soon shooting rubber-coated steel bullets directly at the children.

At 5pm the soldiers stopped shooting and the demonstration ended.

The village of Ni’lin has had several demonstrations a week since the construction of the wall on their lands started in April 2008. The Israeli army has responded with brutal force and as well as two deaths, over 600 have been injured and more than 50 people have been arrested.

Universal Children’s Day imarks the promotion of welfare for the world’s children. In a town where many children have already been injured, arrested, interrogated and killed by the Israeli army for their participation in the non-violent resistance, it is important to recognize the protections that ought to be afforded to them as children. Those who have not suffered injuries themselves are not untouched; they must bear witness to the brutal effects of the occupation on those they love, their families.

According to the Declaration on the Rights of Children, adopted on November 20, 1959, every child, without any exception whatsoever, shall be entitled to these rights, without distinction or discrimination on account of race, colour, sex, language, religion, political or other opinion, national or social origin, property, birth or other status, whether of himself or of his family. A broken promise on protecting of children by a signing member of the Convention on the Rights of the Children, Israel, must be challenged.