New
Home / In the Media / ei: The struggle is not over – Remembering Mohammed al-Kurd

ei: The struggle is not over – Remembering Mohammed al-Kurd

To view original article, published by The Electronic Intifada on the 26th November, click here 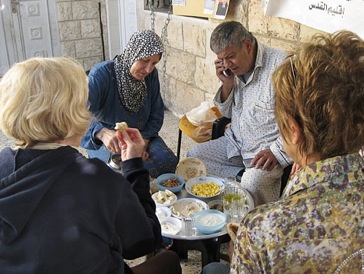 The saying that a man’s home is his castle goes back to the 1500s. Whether it is a mansion or a mud hut, a home to which you can retreat and be safe is a basic human need. But since 2001, Abu Kamel (Mohammed al-Kurd), his wife and five children were forced to fight every day for the right to stay in the East Jerusalem home his family had lived in for decades. And although the Jewish settlers who tried to push them out — literally — didn’t put a gun to his head and pull the trigger, they might as well have.

Two weeks after the al-Kurds were finally evicted from their home on 9 November, Abu Kamel suffered a fatal heart attack. Now, Um Kamel (his wife, Fawzieh) who I grew to admire and respect while I camped on their patio as a volunteer with the International Solidarity Movement (ISM) must wage the fight alone.

In October, my friend Jean and I traveled to Palestine from the United States to volunteer with the ISM during the fall olive harvest. When a foot injury ended my usefulness at olive-picking, we left Nablus for East Jerusalem, where the ISM had been keeping watch on the al-Kurds patio since the summer hoping to prevent the eviction that eventually came.

The al-Kurds’ house is part of a project that the Jordanian government built with the UN agency for Palestine refugees, UNRWA, to house 28 families who were forced to flee their original homes in 1948, after the Nakba, the forced expulsion of Palestinians from their homeland. Abu Kamel’s family was forced to flee West Jerusalem during the ethnic cleansing, and settled in the house in the Sheikh Jarrah neighborhood. All of the parties involved agreed then that ownership of the houses would be transferred to the families within three years.

There they lived in peace until shortly after the June War in 1967, when two groups of Jewish settlers claimed ownership of the land, despite the earlier, documented agreement between Jordan and UNRWA. The struggle that followed took both parties into the courts, then escalated dramatically in 2001. When Abu Kamel suffered a heart attack and his family left the house to take him to medical treatment elsewhere, one of the settler families took advantage of his ill health. They moved in and occupied an extension to the home that the al-Kurds had renovated for one of their sons. When they returned, the al-Kurds faced the agonizing choice of abandoning their longtime home or living side-by-side with the representatives of a group that was trying to force them out. Despite Abu Kamel’s fragile health, they chose to stay and fight.

Early this year, the situation began heating up. Despite the fact that the Israeli Supreme Court had ruled that the settlers claim on the land is fraudulent, an investment company acquired the right to raze all of the Palestinian homes in the community and replace them with 200 settler housing units and a commercial center. 15 July 2008 was set as the eviction date, and while the al-Kurds who became the standard bearers for the entire neighborhood appealed once more to the court, the ISM moved in to help. In response, the settlers’ organization hired their own protection, an armed guard.

We lived in two tents set up on the patio, and one of us was present 24 hours a day, sleeping in shifts throughout the night. Um Kamel brought us tea at 7am, and she and Abu Kamel joined us for a traditional breakfast at 9am. A midday meal followed at 3pm. Although language was a bit of a barrier at first, we soon warmed up to each other and the routine. Abu Kamel was a quiet, solid presence, and Fawzieh was a model of cheerfulness and perseverance in the face of adversity. In addition to preparing our meals, she regularly played host to visiting delegations from international and Israeli peace organizations telling her family’s story over and over, marshaling support for their cause as well as for the Palestinian community overall.

I will remember our time with the al-Kurds as a highlight of my stay in Palestine, an oasis of warm hospitality in a hostile surrounding. One week later, just after we reluctantly returned to our home in the United States, I got the news: at 3:30 in the morning on Sunday, 9 November, the Israeli army swooped in and forced the al-Kurds out, while detaining the ISM volunteers who had taken our place. That was the beginning of the end for Abu Kamel. Suffering from dangerously high blood pressure, the 61-year-old Mohammed was admitted to the hospital on 22 November. Just hours later, he died.

Abu Kamel lives on through Fawzieh, however. She has kept up the fight with the help of the ISM and other volunteers by camping in a tent close by her rightful home. Despite further attempts by the Israeli army to discourage her, this time through fines and destruction of her canvas shelter, she and her fellow protesters are persevering. This is nonviolent resistance at its best, and its up to us to show that it can work.

Pam Rasmussen works in the healthcare field and lives in Maryland. Visit www.thou-shalt-not-steal.org, sign the petition and send a message to the Israeli government.