On the 19th March, around 30 settlers from Kiryat Arba in Hebron occupied a house strategically placed along the road between the large settlement and the Tomb of Abraham.

The Israeli High Court acknowledged that the documentation that the settlers claimed was proof of ownership was indeed forged and made a final decision on Sunday 15th November that the settlers had 72 hours to vacate the Palestinian owned house. The settlers had made it clear that they will not leave the house voluntarily and threatened to confront any attempt to forcibly evict them. 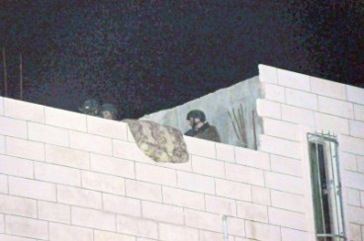 As the 72 hour deadline came to an end yesterday (19th November), settlers had grouped around the house, protected by Israeli army soldiers stationed around and on the roof of the house they were supposed to be evicting the settlers from. The military had previously announced that they were ordered to complete the eviction within 30 days.

A group of around fifty, mostly younger, settlers kept vigilant watch all day. The army was present at all times inside and outside the house. There seemed to be no confrontations between army and settlers.

There was no attempt made by the Israeli army to prevent settlers from attacking Palestinians residents of the area. Several times the settlers threw stones, also using a slingshot, at international human rights activists who were observing the situation. Israeli soldiers were also present on the roof, but did nothing to prevent the settler violence.

From around 11pm, settlers used slings to hurl stones randomly at Palestinian homes around the occupied house. This was occurring from the roof of the house and from around the house. After about an hour of stone throwing, a group of 15 settlers approached a Palestinian house from which the international activists were observing. The settler group escalated their attacks against the Palestinian residents and the internationals staying with them. This lasted for around half an hour before the settlers returned to the occupied house.

At 1.20am, a large group of settlers came down the street close to the occupied house, surrounding and heavily bombarding neighbouring Palestinian houses with rocks. After five minutes of heavy stone throwing, settlers walked in the direction of Ibrahimi Mosque. All night a police or army jeep would patrol the street every 5 minutes without intervening to stop the settlers.

Settlers attacked several Palestinian houses on the way to the mosque, seriously injuring a Palestinian man who was hit in the head by a rock. At 2am they returned to the occupied house they have dubbed the ‘Peace-House’. More Israeli police forces arrived at this point initially and began to intervene, with the stone throwing slowly dying out. The settler youth then surrounded police and army cars and prevented them from moving, by dancing around them and sitting on top of them, while other settlers painted insulting slogans and stars of David on the Mosque.

During the evening Israeli army and police were routinely ignoring settler violence and did not react to the situation until several hours into the violence against Palestinian homes. Appeals to the police and DCO were systematically ignored. Israeli authorities seriously violated their obligation of protecting all civilians as the occupying force.

A neighbour to the so-called “Peace-House”, Atif Jaber, a 40 year old shopkeeper, who has lived in his home opposite the occupied house all his life, says that attacks from the settlers occupying the house are very common and that the police are uninterested in these crimes. The settlers do not only throw stones, they have also vandalised the cars in the neighbourhood, desecrated the local Muslim graveyard and physically assaulted people in the vicinity.

The last assault was on a man called Motee’a, who was hit and kicked by several of the settlers. Atif also says that his father has been offered 9million dollars for his lands, which consists of an olive and grape grove and the land of three houses including the ‘Peace-house’, but that he immediately refused this offer.

Atif maintains that he will never leave the area where he was born.