Many farmers in the Gaza Strip are being denied access to their land by Israeli occupation forces. An arbitrary ‘buffer zone’ is being imposed hundreds of metres deep long the Green Line. Agricultural land has been destroyed in these areas and massive numbers of olive and fruit trees have been bulldozed, devastating the livelihoods of entire farming communities. 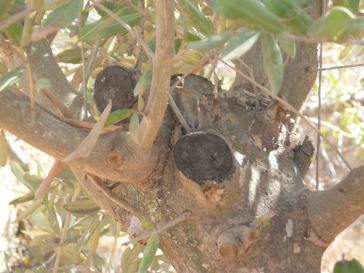 According to the PCHR, approximately 31.503 dunums/31.5 million square metres of land in the Gaza Strip, most of it agricultural, has been razed by the Israelis. This represents at least 10% of the total arable land base of the Gaza Strip. This statistic was published in 2005 but much more destruction has been carried out since. The Al Mezan Centre for Human Rights quoted 31,845,815 square metres of agricultural land levelled by the end of 2007. This does not include lands confiscated more than once; the area confiscated being nearly 10 million square metres.

Gazan farmers have also been impacted by the illegal Israeli siege of the Gaza Strip. Fuel shortages have hampered their ability to power their irrigation systems and closures have made crop exports impossible. As food supplies are severely restricted, it is more urgent than ever for Gaza to be as self-sufficient as possible in food production. The Israeli attacks on farmers and their property are yet a further escalation of the collective punishment suffered by the population of Gaza on a daily basis under this siege. They are akin to the atrocities endured by Gazan fishermen as they struggle to access local food sources in the face of arrests, injuries and even killings. The plight of these farmers and fishermen goes unnoticed by the international community, despite blatant violations of the current ceasefire, which would make headline news if the tables were turned.

ISM Gaza is pleased to be participating in the 2008 Olive Harvest Campaign. We will be accompanying farmers working along the Green Line ‘buffer zone’ to harvest their olives. We have established relationships with farmers in Abassan Al-Kabeera in southern Gaza and are liaising with them regarding their olive harvest. In the meantime, a newly formed group in Beit Hanoun, The Local Initiative, established contact with us to join them and others to harvest olives in the ‘buffer zone’ in their area. The olive harvest in the Gaza Strip has just begun and will continue for a couple more weeks. We look forward to joining farmers in various areas of the Gaza Strip as they harvest their olives and show Israeli Occupation Force soldiers that they will continue to work their land.