On the morning of the 7th October at around 6 o’clock the shepherds from the Susiya area were out grazing their sheep as they do every morning. Two young boys had entered a part of their land that has been declared by Israel to be a closed military zone for the last four months. 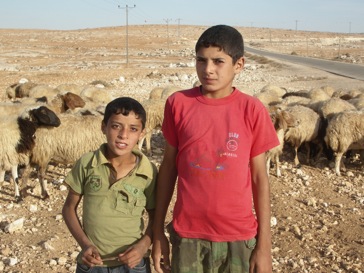 Five settlers came towards them with covered faces and threw stones at the sheep and the boys. Both the children and the sheep fled down towards the valley. One of the boys lost his shoes but kept on running. Near where the boys were is a Israeli military tent. The soldiers reached the Palestinians and the settlers, and ordered the Palestinians to leave the area. They were asked about what their response to the settler violence would be, but this was never answered.

A large area around Susiya settlement has in recent years become a closed military zone. The official reason for the military order is that there are doubts about to whom the land belongs even though the Palestinians have papers from the Ottoman period that proves their ownership.