Israeli soldiers opened fire on civilians at Huwarra checkpoint at 8am on Monday 22nd September. 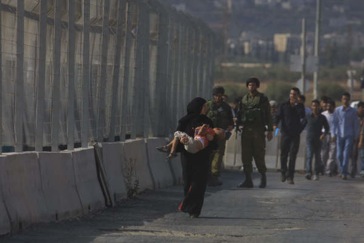 The gunfire followed an alleged attempt by a Palestinian woman to pour acid on Israeli soldiers, echoing an attack that took place at the checkpoint two weeks ago. There are mixed reports as to whether any soldiers were injured in the attempt, with some eyewitnesses claiming that most of the unknown substance was thrown on the ground, some inadvertantly splashing a nearby Palestinian man. 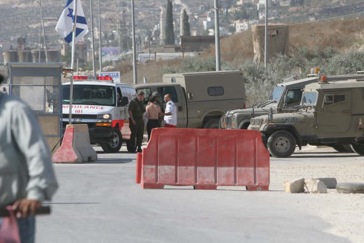 The young woman reportedly ran into the crowd, who were passing through the checkpoint, and was chased by Israeli soldiers. Soldiers then opened fire on the crowd of innocent civilians, using live ammunition. Four people were reportedly injured by the gunfire, with two requiring hospitalisation. 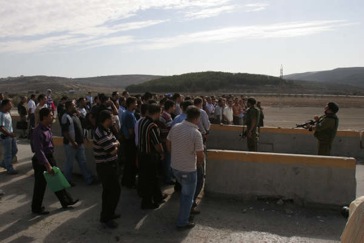 One, Iyad Amer, a nurse in Nablus, is currently being treated in the Arab Special Hospital in Nablus for gunshot wounds to his foot and shoulder. Another, Mahmoud Fateh Daroushi, 18 years old, from Arwata, was passing through the checkpoint on his way to university when the woman ran past him. He was then hit in the lower back with shrapnel, as a bullet ricocheted off a nearby rock. He reports that the soldiers were firing directly into the crowd – at the ground and at waist-height, from just 4-5 metres away.

One woman was arrested – Saabil Break, an English student at An Najar university in Nablus. It is unknown at this time as to whether she is the same woman who escaped detention after the acid attack two weeks ago.

Huwarra checkpoint is one of the busiest in the West Bank, with thousands of Palestinians passing through each day. It is especially crowded in the early morning, as workers and students pour in to the city from around the region.

Israeli military spokespeople are claiming that these attacks are the result of supposed leniency being exercised by Israeli soldiers at checkpoints during the month of Ramadan. During this month, however, human rights organisations have documented beatings; regular use of arbitrary detention; and extreme and unnecessary delays resulting in queues lasting many hours. Also in this month, Naheel Abu Rideh was denied entry to Nablus through Huwarra checkpoint for many hours whilst in labour, resulting in a stillbirth of her second child.