Settler shoots farmer’s dog in front of him in Susiya

On Tuesday August 27th at 7.30 pm, Palestinian shepherd Khaled, and his son were walking their sheep and goats back to their tent camp in Susiya when a settler stopped his car in front of them and shot their sheep dog in the mouth before driving off again. 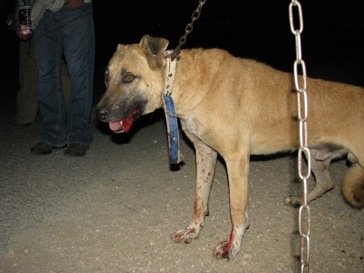 A white Toyota stopped in front of Khaled and his son when they were on their way home after a long day in the fields with their goats and sheep. A settler from the illegal settlement in the nearby archeological site took out his gun and shot the sheep dog. The bullet hit the dog in the mouth making a hole in it’s tongue and damaged the side of it’s mouth.

An international activist living with the Palestinians heard the shot and ran to the two shepherds, together they caught the dog that had run away and called the police.

The Israeli police came and interrogated the two shepherds and the international activist for two hours before claiming that the dog had eaten something wrong that had caused the bleeding.

The dog has been taken to an animal hospital in Jerusalem and the doctors confirm that the dog has injuries that look like they were caused by a bullet.

The 35 families that still live in the tents in Susiya are very poor and live mainly from what they harvest from their land along with the milk and meat from their goats and sheep.

The Palestinian shepherds and their sheep are being attacked by settlers almost daily and receive no help from the Israeli police and army who are there to protect all the citizens of the area.

The Palestinians see the shooting of the dog as a threat and fear for themselves and their animals when they go out.