At 6.30pm on Saturday August the 9th villagers of Ni’lin accompanied by Israelis and internationals walked to their fields to have a noise demonstration against the nearby settlement of Hashmonaim. The settlement was built in 1981 on 8000 dunums of land belonging to the farmers of Ni’lin. 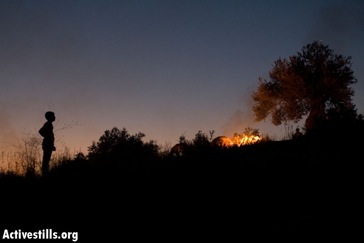 The demonstrators built rock road blocks on the sand road leading to the construction site of the illegal apartheid wall, in order to keep the Israeli army away from the nonviolent protests against the wall which will ensure the continuous annexation of their land. Two jeeps with Israeli soldiers drove to the first road block and started shooting tear gas on the people gathered in the fields. This attempt to stop the protest failed and the villagers managed to create a big drum out of an old well. 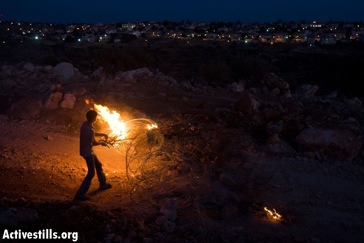 Fires where made in the grass which made the nonviolent noise demonstration an aesthetic experience. Soldiers continued to aimlessly fire teargas across the valley, putting on an unexpected fireworks show for the people singing and dancing around the fires. 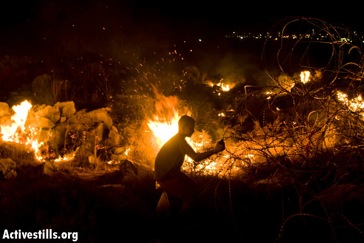