Since an order issued by the Israeli Supreme court on July 16, 2008 to evict the Al-Kurd family from their home, located in the Sheikh Jarrah neighborhood of Jerusalem, neighbors, friends and international solidarity activists have maintained a strong presence at the house to show their support for the family. 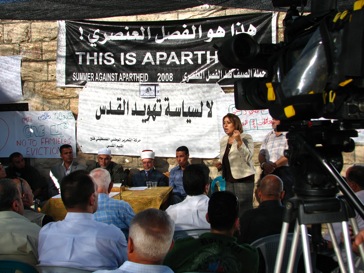 By day members of the community visit with the family, while by night internationals sleep at the home. The internationals, consisting of at least six ISMers every night, are prepared to physically prevent the Israeli police or army from evicting the Al-Kurd family by creating a blockade in front of the house. The intention of asserting international presence is an attempt to prevent the family from being removed from their home and to raise awareness in the media about the injustices committed against the Al-Kurd. 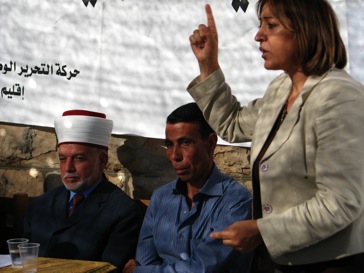 The issue of evicting Palestinians from their Jerusalem homes has entered the media in recent weeks. Al Jazeera, Condoleeza Rice, Haaretz, the Palestinian News Network, and online news sources such as Yahoo and MSN have made mentions of this contentious issue. Most have highlighted the injustices being presently committed.

The Al-Kurd family are just one family out of twenty-seven that have fought in the Israeli courts for their home. The Al-Kurd’s house is part of a housing project that was built by the United Nations Refugee and Welfare Association (UNRWA) along with the Jordanian government to house twenty-eight families who had fled their homes during the Nakba. Shortly after the Six Day War in 1967, two groups of Jewish settlers (Oriental Jews Association and Knesset Yisrael Association) were successful in falsely claiming the property. In 1972, they registered the land, twenty-eight dunums, in their name with the Israeli Land Registrar. The families were brought to court by the settler associations in 1982 and without their consent, their lawyer (Tosya Cohen) reached an agreement to exchange the land for granting the families the status of protected citizens under Israeli law.

The families, having refused to pay rent to the settler associations, received an evictions notice. Further investigations led to clear indications that the settler associations did not legally own the land but the land registrar refused to conduct a rezoning of the area necessary to declare the rightful ownership of the land. The family had no option left but to turn to the Israeli Supreme Court, which made its decision on the false 1982 agreement without regard for new evidence since.

The community has shown its commitment through their continuous support for the Al Kurd family. Neighbors, friends and internationals have made a pledge to show their dedication to this critical issue. A stance against the evacuation of the Al-Kurd family will set a precedent for the other twenty-seven families. Demonstrating strength in numbers, the objectors to Israel’s eviction policies against Palestinians will persist in guarding the Al-Kurd family and home.