On Sunday 20th July, four two Palestinians and four internationals were arrested in Susiya, South Hebron Hills, after settlers confronted them as were out grazing sheep. The group were arrested despite the fact that only the day before the Israeli army had confirmed that they were allowed to graze the cattle in that area. 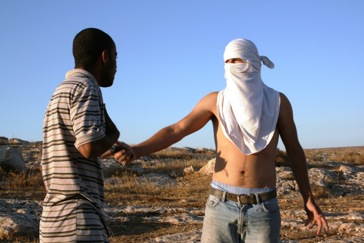 As the group set out early in the morning, a settler, with his face covered, ran towards them in an attempt to chase the sheep away while screaming “this is my land”. He was soon joined by four other settlers carrying sticks, who forced the Palestinians and internationals to move quickly from the area.

Israeli soldiers then immediately turned up and detained the group, despite the fact that all they had done was to take sheep to a previously agreed area and film while settlers attacked. Israeli police then arrived and arrested the group.

The group were kept eight hours in Kiryat Arba police station, before all were suddenly released without charge.

One of the group asked Abu Mohammed, one of the Palestinians arrested, how he felt:

“I am very tired and I am very angry. I dont have any rights as a Palestinian. Rights apply totally differently to Arabs and Jews. The settlers can do whatever they want to hurt the Arabs, and the army will support them. But the Palestinians get arrested for nothing, just like we are now. The Israeli law is on the side of the settlers.”

There have been increased settler related problems in the Susiya area recently, with attacks becoming more frequent, while still the Israeli army and police do nothing to protect the Palestinian farmers in the region.