On the afternoon of the 5th July, the Israeli army built an earth mound blocking the only entrance to the village of At Tawamin in the southern hills of Hebron. Just in time international and Israeli activists showed up whereupon the soldiers claimed, “it was a mistake”. Half an hour later the earth mound was removed by the same forces that earlier constructed it. 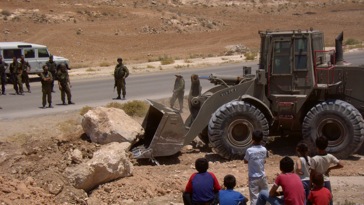 Around 20 soldiers were based by the entrance of At Tawamin busy putting up blocks and gravel in the middle of the road with a bulldozer, preventing Palestinian vehicles to enter or leave the village.

A large number of international and Israeli activists were just a few kilometres away and managed to show up before the soldiers were ready to leave. Of some reason the soldiers then backed off from their decision claiming that “it was a mistake”.

With the activists and the children of the village sitting on the slopes watching, the bulldozer had to remove the heavy blocks and the big piles of gravel. After struggling with it for almost half an hour the entrance was re-opened.

At Tawamin is a village situated just a few hundred metres south of Road 317 that cuts of the very southern part of the West Bank from the rest, basically only allowing Israeli vehicles to use it. Along the road several settlements and outposts (illegal even by Israeli law) are strategically placed and the violence from the settlers in the area is increasing as can be read in a number of other reports. Especially in the weekends (the Sabbath) a lot of outposts, empty during the work days, get populated by people using their spare time to threaten and often beat Palestinian farmers and shepherds in the nearby hills.

Sadly, although not to surprising, the Israeli army little to stop the abuse. Instead they are doing their best to isolate the Palestinian villages by putting up roadblocks and earth mounds in front of the villages’ entrances or in the middle of the already terribly bad dirt roads that are connecting the villages to each other and to the bigger towns north of Road 317.

For how long the entrance of At Tawamin will remain open is impossible to predict. But the example shows once again how important international presence in the area is.