Protest against the apartheid wall in Beit Hanina

On Friday 11th of July, the people of Beit Hanina marched to the settler road where Israel is about to build the wall. About 100 Palestinians and international solidarity activists participated in the demonstration. 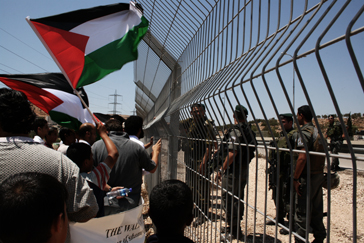 Israeli soldiers and border police came to dissolve the demonstration. They were shouting and yelling at the demonstrators, eventually forcing them to leave the spot. 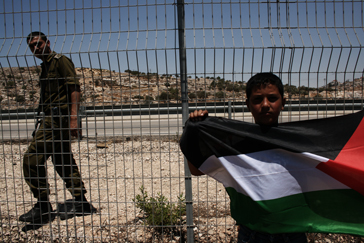 On the other side of the road, another demonstration with people from the cut off part of Beit Hanina took place. The two demonstrations weren’t able to meet up because of the settler road which is surrounded by fence and watched by soldiers.

About 300 people from Beit Hanina and villages close by joined in a demonstration against the wall on the 9th of July. The people marched along the wall next to the settler road which divides Beit Hanina in two. They marched for about one hour until they reached one of the gates in the wall. That gate blocks a tunnel which if there was no wall could combine the two parts of Beit Hanini under the highway. About 300 people from the “new” Beit Hanina, (the Jerusalem side of Beit Hanina), were supposed to meet the demonstration from their side of the gate, but they were stopped by roadblocks put up by the army before they reached the gate. 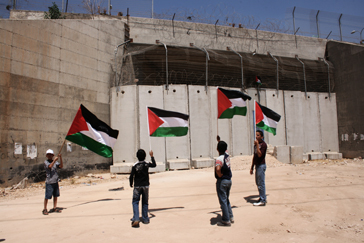 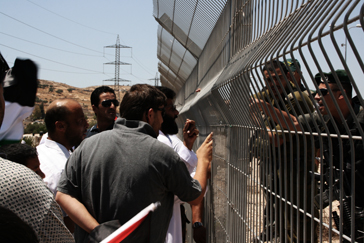 Beit Hanina used to be the largest village in terms of total area in the West Bank. But it isn’t any longer due to the occupation. Israel started to confiscate land to build seven settlements. After that land was taken to build the highway from the settlements to the center of Jeruselem in 2003. The highway separated the village in two, new Beit Hanina on the Jerusalem side and old Beit Hanina on the West Bank side. Before the highway it took about two minutes to go from one side of Beit Hanina to the other. The gate under the highway isn’t opened under any conditions, except for the Israeli army, which means that it now takes about one hour and a half to go between the two parts of the village. Many villagers have family and friends on both sides of the highway.

Now the occupation is taking another 55 500 dunums to build the wall so that the “old” Beit Hanina is surrounded by the wall except for one small road to Ramallah. The wall is planned to be built like a hook around the village. The work with the wall started the 16 of june and ever since bulldozers have destroyed the land. Up to 2,000 year old olive-trees have been cut to prepare the ground for the wall. Almost the entire village depends on the olive trees for their income. After the wall is complete the villagers will lose access to roughly 2000 trees.