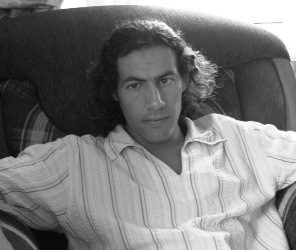 Bil’in village has been struggling for its land, resources and liberty, and against the apartheid Wall for 4 years. When the struggle is that long, almost every resident of the village is involved in non-violent resistance. And amongst those, there is Ashraf, “Bil’in’s Che Guevara”, who has dedicated his life to the village’s resistance. Since Sunday, when Bt’selem, the Israeli human rights group, released a video showing him being shot at close range by an Israeli soldier, the young man is no longer anonymous.

Earlier this week, the Palestinian and Israeli press, as well as international newspapers, released the story of Ashraf, a young Palestinian man from Bil’in who appeared in a video shot by a young girl from Ni’lin village. On the screen, he was blindfolded and handcuffed, with a soldier aiming his weapon at Ashraf’s leg, from less than 2 meters away. The soldier targeted, and fired, a rubber coated steel bullet at his toes.

We met Ashraf in his friend’s house in Bil’in, the town where he was born and raised, and to which he has dedicated his life. The huge house overlooks the hills and would offer a great view over a beautiful land planted with olives trees… if there was not an Israeli settlement in the middle.

Ashraf Abu Rahma is a 27-years old man from Bil’in, whose life has turned busy since the release of the video, as journalists are queuing to hear him tell his story. But Ashraf is not the one who will speak, his friend Abdullah is there to help him translate. Together, they are meeting the press and organizing the interviews, with Abdullah speaking and translating on his behalf.

Since the beginning the town’s resistance in February 2005, Ashraf has been one of the main activists, sharing every action with the community, carrying on the non-violent struggle to reverse Bil’in fate. By annexing close to 60% of Bil’in land for Israeli settlements and the construction of the apartheid wall, the state of Israel has been strangling the village for four years.

Behind the Wall, on the Israeli side, the Bil’in popular committee has built an outpost, that is located right between the gates of the Wall and the closest settlement, about 100 meters away from the illegal construction. This Palestinian outpost – copied on the Israeli outposts which were built prior to the definitive establishment of the settlement- is used by the Palestinian villagers to monitor the activities of the neighboring settlement. By establishing this room, they are preventing the building of new houses in the settlement as well as settlers’ attacks on the village.
Living in an outpost

This outpost is Ashraf’s main residence, the place where he sleeps every night, taking care of the village. “But sleeping in the outpost is really dangerous. I tried it myself”, said Abdullah. “Once, 20 settlers came together and started throwing stones at me”. Although it is dangerous, the outpost has its use and brought a great victory to Ashraf and the villagers when they prevented, earlier this year, the establishment of a new settlers’ outpost by having monitored their arrival on time.

As a committed communist, blessing Che Guevara as a mentor, Ashraf has been carrying diverse actions to keep the Bil’in struggle alive. Two months ago, he climbed the electric pylon that overlooks every settlement, and stayed 20 meters high for 5 hours. “By attracting attention on Bil’in and monitoring the dangers that might come, Ashraf is a key member of our struggle.” But for this, he was sent to jail for 2 weeks and had to pay 10.000 to be released on bail. “Once, the settlers from the surrounding area released aggressive pigs to attack us”, said Abdullah. “He was not even afraid of them. He’s neither scared by the soldiers, the settlers, nor the animals”. That gave him another nickname: The hyena.

The Bt’selem video released on Sunday put once again the spotlight on Ashraf. The footage was shot in Ni’lin, a village close to Bil’in that has, for the last two months, shared the same fate: carrying ongoing non-violent protest in order to stop the building of a new section of the apartheid Wall. The videotape was shot by a 17-year old girl called Salaam Kanaan and shows Ashraf Abu Rahma being shot from a two-meter distance by an Israeli soldier while blindfolded and controlled by another soldier. The incident occurred on Monday the 7th of July, while the entire village was held under curfew.

As a sign of solidarity, many residents from the surrounding villages took part in the peaceful demonstrations in Ni’lin that day, along with Israeli activists and internationals. Ashraf was one of them. “He always wanted to come with me to Ni’lin, to show his support to the villagers” told Abdullah. That Monday, it was the first time that Ashraf went and demonstrated outside his own town.

They arrived in Ni’lin around 11 A.M that day and were trying to reach the crowd when 4 Israeli jeeps stopped them and started launching sound bombs and tear gas on the group. In order to avoid inhaling teargas, they ran into olive tree fields and found themselves, along with ten internationals, trapped and surrounded by the occupation forces.

Ashraf was taken to an Israeli jeep where he was beaten, his head on the ground, the soldiers cursing at him in Hebrew. When they reached the entrance of Ni’lin town, they started blindfolding him and attaching his hands behind his back. When out of the car, he was left under the sun for three hours, blindfolded and without water.

“They started speaking in Hebrew, which I do not understand” said Ashraf, “the only word that sounded familiar was ‘gummi’ – meaning rubber. I did not think they intended to shoot me because they were too close, about 1 meter and a half away from me. Way too close.” But they did. The commander gave the order and the soldier shot. The bullet targeted his feet and Ashraf fell down on the ground, without remembering anything from the previous scene. To Ashraf, what happened will never stop him from to continuing his fight for their land. It made him perhaps even more determined. “Many times they have tried to stop me, but each time, it makes me stronger”.
Recording the daily Israeli violence

As Ashraf can not remember what happened that day, the story could have ended there. With no international media coverage, there is a lack of attention from the international community on the daily Israeli crimes.

And this would have been the case had it not been for Salaam Kanaan, the 17-year old beautiful and quiet girl, who was recording the event that day. She is still in High school, in the 11th grade and taking pictures and shooting videos is her passion. A productive and useful passion as her footage was broadcasted throughout the world. She wants to study communication technology, but since the video was released and shown on every channel, she is considering becoming a journalist, as everyone has told her she might have a great career as a reporter. And nothing could be more true.

Salaam was in Ni’lin -where she lives with her family- filming images from the demonstration from her house when the event happened. She has been doing this for a while, recording family events and school friends during her free time. But this is her first ultimate scoop.

We asked her if she was scared of Israeli retaliation while recording the incident. “No”, she answered straightforwardly. “I felt I had to do it.” But this morning, the Israeli occupation forces have arrested her father while he was watching –again- the peaceful protest against the Wall.

Since Sunday, both Ashraf and Salaam have become heroes for a while. But they have been fighting for much longer than what was recorded that day and this is the least that they deserve. For them, as well as for all the Palestinians who are daily peacefully fighting against the confiscation of their land and their freedom, and facing the Israeli unreported violence. For four years, entire Bil’in has been fighting. And two months ago, the town of Nil’in started too.

But again, the impunity of the Israeli crimes seems to be taking over. A short investigation was opened and the soldier who was seen firing the gun on the video was questioned. As he claimed he received a directive to shoot from his commander –who is still currently denying the facts- he was released on active duty on Tuesday, and residents of Ni’lin told B’Tselem that they saw the soldier the following day, still serving in his unit. Bt’selem as well as the Bil’in popular committee are still following the case, and asking for an immediate investigation.