One family’s experiences during the siege of Ni’lin

During the curfew in Nil’n the al-Khawaja family was among those who faced several difficulties and attacks from the Israeli army. 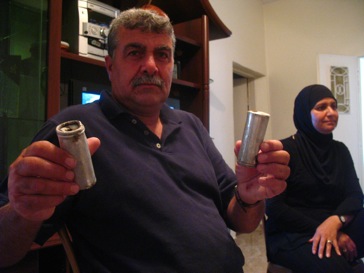 Saturday at 5.30 am Ali Nuzhhy al-Khawaja, 58 years old, and two other villagers were on their way to their work places outside Ni’lin. Israeli soldiers had hidden among the olive trees and started to yell at and run after the three men. While they grabbed and abused one of them, Saleh Abud Srur, 55 years, the others ran away to escape the soldier’s violence. Saleh was arrested and the Israeli soldiers tried to force him to give them information about the two other men. They men could not reach their jobs and Saleh is still under arrest. The morning after soldiers went inside the al-Khawaja family’s house. 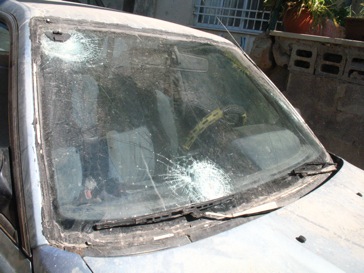 Sunday afternoon at 4 pm Ali’s daughter’s family, including two small children, went to Ali and his family since they had ran out of food. They managed to reached the house. Soon after this Fanysia al-Khawaja saw Raed Nafee, 22 years, being hit by an Israeli bulldozer. He managed to get away and Fanysia called him inside the house. He had broken his hand and was in need of medical treatment. But since the Israeli army obstructed the medical relief teams work and stopped ambulances from entering and leaving the village, he had to wait four hours’. Driving inside Nil’n ambulances also had to be careful as they risked being shot at.

While they waited for the ambulance the army shot teargas into the house. There was eleven people in the house at the time and the two smallest children was badly affected by the gas since they are only two and six month old.

The family’s car was at the same time hit by a sound bomb which broke the front window and punctured one of the tires.