On the night of July 7th, 2008, the Israeli army, numbering between 120 and 150 jeeps, entered the city of Nablus. They entered a suburban shopping mall, several charity organizations, a girl’s elementary school and adjoining medical clinic, the last of which they did not have an army order to enter. 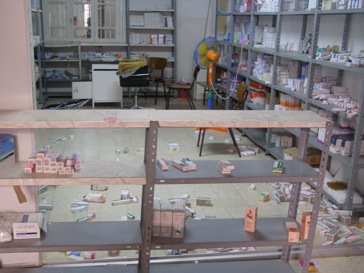 According to the Israeli army, the owner of the mall building is a member of the political party Hamas. Their pretext for taking control of the mall is therefore his alleged ties to deemed terrorist organizations. The army intends to close the mall on the 15th of August, 2008 and convert it into a military base. Without compensation are the approximately 120 small shop owner and renters who will lose their businesses. A typical example is that of Ahmed and his four brothers’s who bought a small pizzeria for 250, 000 Dinars ten years ago and have maintained it as a family run-business in the ensuing time. “This is my whole life,” he told us. This is a particularly harsh to him because his entire extended family will be affected by the closure. The shop owners are filing a complaint to the Israeli courts but have little hope of halting the army. 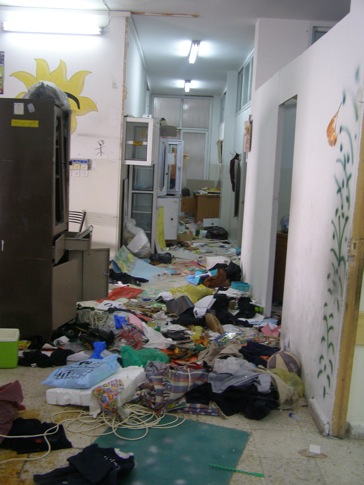 Equally egregious is the armies invasion and destruction of an elementary girls school and the neighboring medical clinic. In order to enter the school, the army, in a wave of mindless violence and destruction, destroyed doors and looks, smashed windows, stole the girls computers, and even vandalized the telephone kiosk. The school has now been closed indefinitely, damaging the innocent pupil’s education and future prospects.

More distressingly for the residents of Nablus is the simultaneous criminal attack on the Islamic Medical Centre that adjoins the girl’s school. This outrageous act of brutality started with the forced entry of a ground floor door. This was the sixth and most destructive of all attacks on the charitable medical centre since 2001. The criminal act of theft was evidenced as the illegal intruders used explosives to gain access to the centre’s safe where they stole over 2,000 JD of employees pay. Over 4,000 family’s files, approximately 20,000 individual’s, were stolen – causing immense distress to doctors trying to continue treating severely sick patients with out their background information. Along with these files also stolen was the office and administration hardware with items including computer, fax machine, and photocopier. During this violent attack office furniture including desks and chairs were overturned and smashed.

An elderly doctor, Hafez Sader, who had devoted his lives work to the medical center was shaken when he described the painstaking hours and hours he and his staff had spent trying to put back the medicine in the pharmacy that had been taken out of packets, mixed, and strewn over the floor. There has been no order or reason given for such an attack on this charitable medical centre. ‘This is the language of power’ Sader stated.