Work day on the Jabri family farm in Hebron

On the 20th June, almost 15 internationals and Palestinians joined the Jabri family of Hebron for a mid-morning action on the Jabri family land. The Jabri land is uncomfortably nestled between two particularly notorious Jewish settlements, Kiryat Arba and Givat Ha’avot. The expansion of these settlements onto the Jabri property–meaning the theft and colonization of Palestinian land–is currently a work in progress. The Jabri family, with support from Israeli and international solidarity activists, continue to nonviolently resist this process of expropriation. 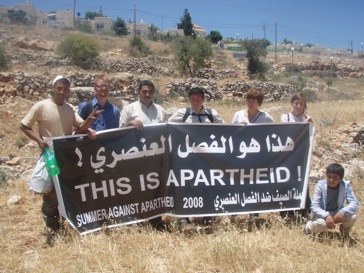 Trespass is the first step in the annexation/colonization of land. Settlers first assert a claim to Palestinian land by illegally occupying it; in this case, settlers from Kiryat Arba and Givat Ha’avot have constructed a brick walkway through the middle of the Jabri land, connecting the two settlements. They have also built a 12- by 14-foot tent-like structure which they use as a synagogue on the land. Under Israeli law, if the structure remains on the land for 10 years, ownership of the land will be transferred to the settlers. This year it has been there for eight. 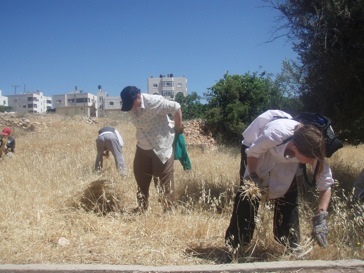 As of today, the Jabri family still has possession of their land. To stop the process of expropriation, the Jabri family went to court and, surprisingly, won a decision allowing them continued access to their own land, even though settlers had already asserted a claim to it. For several months every Friday, internationals and Palestinian human rights activists has supported the Jabri family by helping to work the land. This regular presence of the Jabri family and supporters working the lands is often met with violence and harassment by Kirtyat Arba and Givat Ha’avot settlers. During the last month there has been a break in the support for the Jabri family, until today. Now it will start again with regular presence at Fridays. 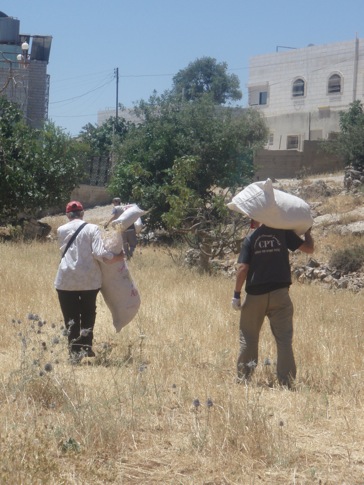 Today it was a very calm day. We helped with the harvesting of the grass, which will be used as food for the goats during the winter. The police were expecting us, so they came as soon as we started harvesting. Telling us to stop working, so that they could check if it was ok for us to be there. They looked at our passports and after a few minutes we could continue. One settler stood with them filming us, and gave comments like “Thank you for helping us clean up, so we can build new houses here!”. But he was just ignored by us. A couple of times during our midmorning efforts one or two settlers walked either down or up the path which cuts the Jabri land in half, but not once did a stone get thrown our way, and not once did any settlers attack or attempt to disrupt today’s work. In fact, the settlers, for the most part, were nowhere to be seen. We had our friends, our water, and all the sunshine and fresh air you could want.